Pennsylvania Underestimates Death Due to Opioids by More Than Half!

An important barrier to formulating effective policies to address the rapid rise in U.S. fatal overdoses is that the specific drugs involved are frequently not identified on death certificates.

Current death certificate data are problematic for understanding the drug poisoning epidemic, with a particular issue being the frequency with which no specific drug is identified. This results in an underestimate of the involvement of specific drugs in fatal overdoses (but not in the overall number of drug fatalities), which is sometimes substantial. For instance, mortality rates calculated using imputed data on specific drugs where such information was lacking on death certificates suggest that in 2014 opioid and heroin involved death rates were understated by more than half in Pennsylvania (8.5 vs 17.8 per 100,000 for opioids and 3.9 vs. 8.1 per 100,000 for heroin).

Not only that, PA is the worst state in terms of underestimating the involvement of opioids and heroin in drug poisoning data as shown in the following table. 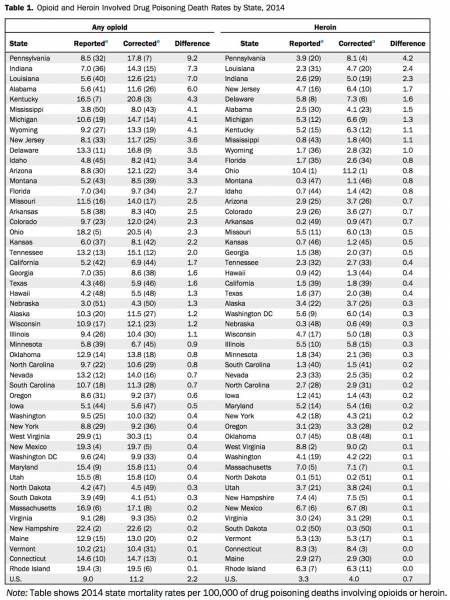 I attended a Langhorne Rotary Club luncheon on Thursday, July 27, 2017, where Bucks County DA Matthew D. Weintraub spoke about the opioid epidemic "task force". A key component of the Task Force is the "Push the Pusher Out" campaign, which encourages people to "report drug activity" and receive up to $5,000 in rewards.

While I agree that drug pushers need to be found and arrested, I fear that many minor drug users will be caught up in the net, while the really BIG opioid pushes, i.e., drug companies like KVK Tech (see here), are ignored. I made this point to DA Weintraub. Listen to my comments near the end of the following video clip.

Attacking the Root of the Opioid Crisis - Pharmaceutical Companies

The following is excerpted from the article “WHAT’S NEXT AFTER LARGEST-EVER OPIOID CRIME SWEEP?”

We can’t educate doctors and patients on the effects of opioids without addressing the source of the problem: the pharmaceutical companies.

“Drug companies such as KVK-Tech that manufacture opioids have an obligation to ensure their product is not diverted illegally and are safe to use,” John Mack, owner of Pharma Marketing News, told us.

He explained that companies like KVK-Tech are not only failing to do all that they can to prevent abuse, but they may have even known that their opioids were going straight to illegal pill mills or pain clinics.

He points to a 2014 Drug Enforcement Administration case involving Masters Pharmaceutical. KVK’s representatives stated that the “majority of the oxycodone they manufactured was sold in Florida due to the demographics of the population, the prescribing patterns of Florida physicians, the prevalence of pain clinics, and laws which [then] allowed physicians to dispense controlled substances.”

“This verges on knowing that much of its opioids may have been diverted by pain clinics operating illegally since federal authorities have long focused on Florida pain clinics as bad players in this crisis,” Mack explained.

“Aside from ensuring the safe and legal use of these products, opioid-producing drug companies should, in my opinion, fund local and national efforts to combat addiction to these drugs. In my community, for example, I urge KVK-Tech to fund a 24/7 drug drop-off box so residents can safely dispose of their unused drugs, including opioids.”

If we have any hope of fighting America’s opioid crisis, the federal government, medical community, and pharmaceutical companies must continue to hold themselves accountable for their roles in the epidemic.

At the July 6, 2017, Zoning Hearing Board (ZHB), I objected to KVK Tech's request for zoning variances. At that hearing, representatives of KVK Tech testified under oath that the company's major selling products are opioids.

Here's what I said:

First and foremost, the proposed additions on Terry Drive are unnecessary because of property KVK Tech owns on the Newtown bypass, which the company says it is in the process of refurbishing.

Why must KVK expand capacity at the Terry Drive location -- right in the center of town -- when it has a location elsewhere that is more appropriate for the manufacture and storage of drugs?

Consequently, denying the requested variances would not constitute an "undue hardship.”

KVK Tech manufactures and sells prescription opioids. The Department of Health and Human Services says prescription opioids are responsible for over half of deaths due to opioid overdose. We can't afford to ignore the impact of the opioid crisis on our own people. Chief of Police Henry Pasqualini is on record saying that opioid overdosing is a problem right here in Newtown.

This board's review, therefore, should require higher standards for any variances granted to this company. As previously stated, there are no hardship consequences due to denying the variances requested, but granting them may be seen as a “favor.”

This is an opportunity to do a small part in reducing the over prescribing of opioid painkillers. Shouldn't the community where these pills are manufactured do what it can to reduce the flow by denying expansion of production in the center of town?

At the very least, we should insist KVK Tech do more to help solve the problem. That may not be the jurisdiction of the Zoning Hearing Board, but as community members, you can ask questions and make comments that you are not satisfied with the efforts made by KVK to address this crisis.

Thank you for listening.

Sad to report that KVK Tech's application for several zoning variances at its Terry Drive location was approved by Newtown's ZHB. This will allow the company to expand its production, storage, and distribution of the opioid Oxycodone right in the center of town instead of at the much larger facility it owns on the edge of town on Newtown Bypass.

KVK is one of over 90 companies in the U.S. that manufacture opioids. KVK Tech claims to be in the business of meeting unmet medical needs. There is hardly a need for more sources of opioids in this country. Americans already consume more opioids per person than any other country. See chart below and more info here.

Yet, despite all the money KVK earns from opioids, the company employs only 120 people or so and has no plans to hire many new workers according to testimony by company representatives at the ZHB hearing. That claim allowed it to win a new zoning favor for only 181 parking spaces when ordinances require 261 spaces.

Robert Ciervo, Assistant Dean, School of Engineering at Rutgers University, and a Newtown resident, commented on my Facebook page: "The worse part of KVK Tech's business model is its blatant abuse of the H1B Visa program to undercut wages and thus tax receipts to the township while shutting out local residents of jobs."

What Can Newtown Supervisors Do?

It's possible for the Board of Supervisors (BOS) to oppose the "recommendations" of the Zoning Hearing Board regarding KVK Tech, but that would likely result in an expensive legal battle that the town cannot afford, especially when it has little chance of suceeding.

The BOS, however, can pass a "resolution" calling upon KVK Tech to help support local efforts to combat opioid misuse and addiction. Some areas requiring drug industry support include:

At the December 12, 2018, public meeting, the Newtown Board of Supervisors (BOS) voted 4 to 1 (Kyle Davis voted no, I and my 3 fellow Democrats vote yes) to authorize Mark J Bern Partners, LLP. and Cordisco & Saile, LLC, to file a lawsuit against the manufacturers, promoters, and distributors of synthetic prescription Opioid medication on behalf of Newtown Township (read "Newtown Township Joins Suit Against Opioid Manufacturers and Distributors").

Three years later – at the December 22, 2021, Newtown Township Board of Supervisors (BOS) public meeting – the supervisors voted to authorize the signing of a settlement agreement with Johnson & Johnson and its U.S.-based Janssen Pharmaceutical Companies (“collectively J&J”) and opioid distributors AmerisourceBergen, Cardinal Health, McKesson.

If all conditions are satisfied, the comprehensive settlement agreement would result in the settlement of a substantial majority of opioid lawsuits filed by state and local governmental entities.

More details, including a list of things the money can be spent on...