Jack Brod, member of the Newtown Township Finance Committee, offers his observations regarding the preliminary 2020 budget at the November 23, 2019, Newtown Township Board of Supervisors meeting. Brod pointed out that the proposed 2020 budget projects $12 million in revenue versus $13.1 million in expenditures, for a deficit of $1.1 million. He noted that the reserve funds are dwindling and suggested that at some point it will no longer be possible to draw from the reserve in order to make up for budget deficits.

The budget continues a "multi-year pattern" of deficit spending, said Brod. The General Account is "essentially a reserve fund that the township has been tapping into to offset the difference bewteen revenue and expenses." He cited the year-end reserves in the General Fund for the years 2016 to 2020 (projected). The numbers are plotted in the following chart. 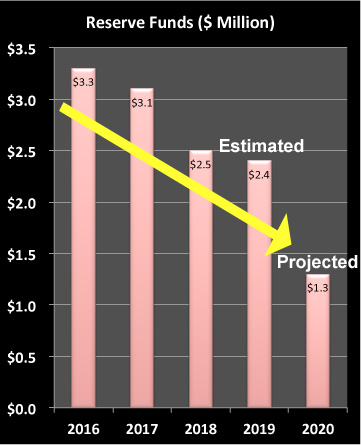