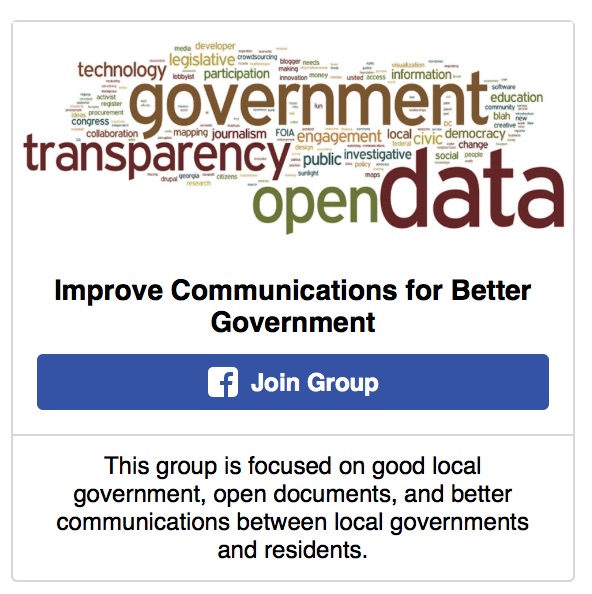 We need an open and honest government that works for the good of everyone in the Newtown Township community.  As a Supervisor, I will work hard to develop and implement more effective print and digital media communications that will inform and engage residents and businesses regarding issues before the Board of Supervisors (aka BOS Definition).

But all this is worthless if the information is not transparent, complete and easy to use. Minutes of BOS public meetings, for example, must provide sufficient information so that residents who could not attend the meeting can understand the issues discussed, see the questions posed by the Board and by the public, and be informed of the decisions and voting record of the Supervisors.

Also, minutes should be searchable. Before I was elected Supervisor, BOS meeting minutes PDF files were NOT searchable. At the January 2, 2018, BOS meeting I explained the benefits of searchable minutes: (1) it makes it easy to find specific topics, comments, and how Supervisors voted on issues when reading the minutes, and (2) it is possible to search for PDF files of minutes by keyword on your computer without having to open each document first. At the very next BOS meeting, Kurt Ferguson - who was the Township Manager at the time - announced that all minutes going back to the beginning of 2016 are now searchable PDF files!

Excerpts from Board of Supervisors Meeting Minutes

Details of important Environment related Newtown Board of Supervisors' decisions and discussions in last few years (organized by issue in reverse chronological order). This is NOT a complete list of items. You can find complete minutes of BOS meetings here. Click this button Definition to access the Glossary for definitions of terms and links to related information.

To keep up-to-date on Newtown Township BOS decisions, follow “Summaries of Newtown Board of Supervisors Meetings” Scoop.It topic, which summarizes the official minutes and/or audio and video recordings of public meetings.

13-Dec-2017: Mr. Gallagher will also prepare procedural rules and conduct guidelines for Supervisors Definition that would be adopted each January. The Board changes often and this would help maintain the continuity of procedures and rituals.

28-Mar-2018: Resolution Definition 2018-R-12 passed 5-0: The Finance Committee is created to serve as an advisory committee to the Supervisors with a dual emphasis on budget analysis and revenue generating opportunities or any tasks or responsibilities as assigned by the Board of Supervisors, and to advise on economic development. Members of the Finance Committee with terms ending December 31, 2018 are: Mark Boada, Stuart Caplan, Richard Weaver, Hank Schrandt, Margaret Dissinger, Jack Brod and George Skladany

13-Jun-2018: Josephine Vlastaris, Chair of the Technology Committee, presented a summary of accomplishments of the Committee. The following is a partial list of the Committee’s current agenda items: Emergency notification system (researched/proposed Nixle): Proactive Township notification of urgent events; Analytics: Committee recommended setting up Google Analytics account to monitor traffic and bounce rate for the township website, and make changes to pages as needed; Parks and Rec: Committee recommended using geolocation technology to assist residents with park navigation. Committee proposed use of drones capturing footage of parks and trails to post on website to familiarize residents with recreational options.

28-Feb-2018: Mr. Mack, Technology Committee liaison, reported that three new members joined the group. He suggested not to cancel meetings if there wasn’t a quorum adding that topics could still be discussed. Minutes would be available for absent members to review in order to stay up-to-date. Mr. Mack would like to modify the mission ordinance of the Technology Committee to add using technology to communicate to residents. The Committee consists of 9 members for a quorum of 5. The Board will need to give priorities to the Committee. Mr. Calabro suggested that this be discussed at the March 19, 2018 BOS Work Session Definition. Five topics will be decided for the Committee to review.

28-Mar-2018: Resolution 2018-R-13: passed 5-0: Committee members will have a one year term ending 2018. Mr. Ferguson stated he would be able to approve funding to a certain amount but if the Committee would create an action plan and specific projects/events, that it could be a line item in the 2019 budget Members of the Veterans Committee with terms ending December 31, 2018 are: Jay Schnitzer, Ed Valenti, Rhett Baxter, Jim Casey, Charles Resch, Jim Gieseke and John D’Aprile.

13-Dec-2017: Mr. Gallagher suggested that the Township create a Veterans Committee to help guide veteran affairs. He will have information prepared for the next meeting for approval.

13-Nov-2019: Savvy Citizen: Mr. Mack inquired about adding Savvy Citizen to the budget as he believes it is a useful tool that would not require much maintenance. Mr. Sander confirmed Board consensus is required at this time to add or subtract from the budget. Mr. Lewis said there is no staff to maintain it. Mr. Mack believes there is not much maintenance required. A discussion ensued on the Savvy Citizen app including the cost, upkeep, staffing and benefits to the community. Mr. Mack moved for the Board to consider revising the budget to purchase the Savvy Citizen App. Mr. Fisher seconded. The motion failed 2-3 with Mr. Calabro, Ms. Bobrin and Mr. Davis voting nay.

14-Aug-2019: Savvy Citizen Presentation: Mr. Mack confirmed that the Savvy Citizen representative will be attending the September 16 work session. At the Last Board meeting it was proposed that a Savvy Citizen representative be invited to attend a future work session. Recall that Savvy Citizen offers a mobile phone based notification system that can inform citizens of meetings, public service notices, Parks and Rec programs, road closures, emergencies, etc. Soon after that meeting, I notified Mr. Lewis that Jeralyn Brown, senior account manager at MSA, the company that is responsible for Savvy Citizen, confirmed that she can attend the Sept 16 Work Session and answer questions. 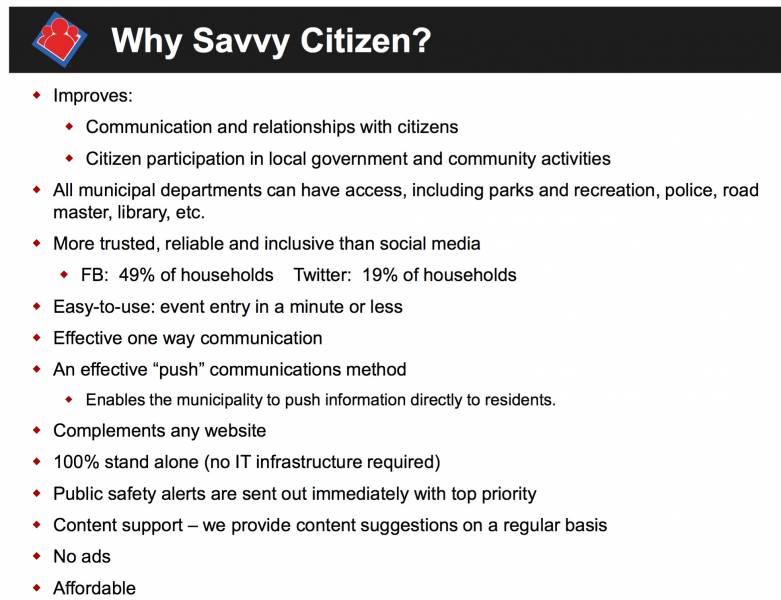 [Listen to the presentation here.]

27-Jun-2018: HOA Roundtable: Mr. Mack followed up with the Board about a proposed for a roundtable discussion with HOA [Home Owners Association] officers to improve communications and discuss MS4 projects. A date will be determined in the future.

14-Mar-2018: HOA Roundtable: Mr. Mack suggested that HOAs be contacted to attend a roundtable discussion to improve communications and discuss MS4 Definition projects. Mr. Calabro asked that a future date be selected so there could be time to identify the HOA attendees, and to plan and advertise the event.

25-Apr-2018: Mary Kremser, Doylestown Borough. Jan Filios invited her to speak to the Board about gerrymandering and fair districting. She asked the Board to approve a Resolution Definition in support of an independent, non-partisan, citizens’ commission to draw the lines for the legislative districts for US Congress and for the PA General Assembly. In 2016, 80% of the primary incumbents ran unchallenged by anyone in their own party. In the November 2016 elections, 50% of incumbents had no challengers from the opposite party. She believes the reason is that politicians have drawn the districts to make their jobs safe, and resulted in the gridlock in Washington and Harrisburg. Mr. Calabro requested that a draft resolution be added to the May 9, 2018 agenda. [At the May 9, 2018, Newtown Board of Supervisors public meeting, an anti-gerrymandering, PA Congressional Redistricting Resolution proposed by Fair Districts PA was passed by a 4 to 1 vote. Read "Supervisors Pass PA Congressional Redistricting Resolution".]

16-Apr-2018: Public Comment by Jan Filios, 454 Trumbull Court: Reviewed Congressional district maps are drawn every 10 years according to the change in census population data. Currently the maps are drawn with the 2010 census. The PA Constitution allows political party leaders to reconfigure the maps. This is a conflict in interest. The worse contortions have been in Southeastern PA and Pittsburgh.

Fair Districts PA and the League of Women Voters is supporting two bills in the General Assembly to amend the State Constitution to form an independent citizens’ commission to take over the task of redistricting in time for the next census results in 2020. Some Bucks County municipalities that have passed this resolution representing 39% of the population are Lower Makefield, Buckingham, Doylestown Township, Bristol, and Middletown. Mr. Calabro recommended that State Representative Perry Warren should visit the Board of Supervisors and he thanked Ms. Filios for her information. He would like to have both Mr. Warren and a representative from Fair Districts attend a Board of Supervisor meeting.

10-Jan-2018: Resident Mike Gallagher, Newtown, commented that he was told there would be no public comment after each motion at the re‐organization meeting on January 2, 2018. Public comment was done at every motion during the 2017 reorganization meeting. There was no public announcement for interviewing professional staff. He then investigated the campaign finance reports and the amounts that were donated and believes there are conflicts. Mr. Gallagher requested the Board to reconsider open and public interviews with multiple professional firms and to reconsider the Board’s appointments.

10-Jan-2018: Mr. Mack favorably acknowledged that the minutes are now searchable PDF files and explained how searching to find a particular subject can be done quickly.

28-Mar-2018: Mr. Mack made a note that minutes are accessible to the public once they are approved. However, there is a delay on posting them on the website until Board member signatures are acquired or corrections need to be made. Mr. Ferguson said if there are no changes, the minutes can be signed and posted the following day. If corrections need to be made, the Township administrative assistant will post a temporary copy of the minutes which would then be replaced with the corrected copy.

28-Mar-2018: Mr. Sander spoke on a proposed social media policy for the Township. He recommended that the Board authorize his office to draft a policy to bind all non-union employees and elected officials. The policy would be used as a negotiation point in 2018 union negotiations with CWA non-uniform and CWA fire, and police. Motion Discussion: Mr. Mack asked for an estimate of the cost and that it wouldn’t infringe on a person’s 1st Amendment rights. Mr. Sander replied that the policy would include reference to the 1st Amendment, and that the policy would take approximately 3 hours to draft. The motion passed 5-0. [John Mack put together a resource folder on his Google Drive of resources related to social media and online ethics that may be useful for Newtown when creating SM GLs. Included are sample guidelines from other municipalities as well as from pharma companies which may be relevant. Also, I included a partial list of books, articles, blog posts, and presentations that I published that discuss issues relevant to developing social media guidelines and online ethical principles. Although these references are focused on the healthcare industry, the principles and issues discussed are relevant for all industry sectors as well as governmental agencies.]

14-Mar-2018: Mr. Mack stated that it was National Sunshine Definition Week regarding the Sunshine Act and the right to know about public document access. He held an online quiz regarding this topic and with 55 people responding, the average score was 50% (see more results here). An example question asked if you could record a public meeting with your cell phone. The answer was that you have the right to record the meeting with your cell. Some public meetings that are not televised can also be recorded (i.e. a zoning board hearing). The Right-To-Know Law Definition allows a person to receive a transcript or recording of a meeting within five days of the request. Requests can be made using a form available on the Township website and submitted to Mr. Lewis, Open Records Officer.