The following is a summary of selected discussions from the February 7, 2022, Meet Mack Monday Zoom meeting. Eleven Newtown Township residents attended this 90-minute meeting. You can listen to the discussion below:

At the January 26, 2022, Newtown Board of Supervisors (BOS) public meeting, several members of the public voiced concerns about a “Newtown Gun Show” to be held at the NAC Sports Training Center on March 26-27, 2022.

According to a January 24, 2022, Newtown Township Notice of Violation (NOV) this type of use is not currently permitted under the existing Certificates of Occupancy for the Newtown Sports Training Center. The NOV was sent to the owner of the establishment (Newtown Racquetball Assoc.), which has 30 days to appeal.

During a podcast interview by conservative Dom Giordano,  NAC owner, Jim Worthington said he had nothing to do with arranging the Newtown Gun show. According to Mr. Worthington, his staff arranged this without his knowledge. In fact, he said he had no knowledge of it until there was protest - mostly from "Democrats" he says. He said he would file an appeal of the Notice of Violation and will POSTPONE the gun show - until he can get the variances he needs. He sounds pretty confident he will get what he needs.

After residents made comments in person at the meeting, Supervisor Elen Snyder submitted over 40 email messages from other residents to have them as part of the record.

While the owner of the gun show, Jordan Vinroe, says that “Ghost Guns” will NOT be sold at the Newtown Gun Show - read “Newtown Gun Show Organizer Eagle Arms Productions Does Not Allow the Sale of Ghost Guns” - [Vinroe] did not disclose that his other business is JSD Supplies sells 80 percent kits [aka "Ghost Guns"].

AR-15 assault rifles can be ordered online and constructed at home. As JD Supplies website says, “…you’ll have a fully functional firearm without the hurdles of a background check or government fees. Your personally built weapon also won’t require a serial number (in most states), making it the perfect solution when privacy is a priority.” The kits are made of a kind of plastic that can pass through metal detectors.

Background checks for legal guns sold by unlicensed sellers, like non-dealers who sell guns online or at gun shows are not required by federal law nor by PA law. This loophole enables people with felony convictions, domestic abuse restraining orders, and other people with prohibiting histories to buy guns with no questions asked. The loophole should be closed to require background checks on all gun sales—not just on the sale of firearms from licensed gun dealers.

The Newtown Zoning Hearing Board is scheduled to meet next on March 3, 2022, and Worthington has until February 24, 2022, to file an appeal the NOV and perhaps argue for a variance at that meeting.

I’ve addressed the issue of pedestrian safety at two previous Meet Mack Monday Zoom meetings (on November 22, 2021  and January 10, 2022) at which several recommendations to address this problem were discussed.

At the January 12, 2022, Newtown Board of Supervisors (BOS) public meeting, several pedestrian safety measures for N Sycamore St recommended by the township traffic engineers were approved for immediate implementation. In addition, the engineers and township were instructed to move ahead to explore other measures. This was in response to many recent incidents including a fatal auto/pedestrian crash, which occurred in the 200 block of N. Sycamore Street on December 22, 2021 (read "Dangerous Crossing").

To date the only measure taken was the addition of "piano" striping to crosswalks at various intersections along the N Sycamore St corridor as shown in the photo below.

The township traffic engineers (RVE) are completing a detailed report with their recommendations for N. Sycamore St. According to the February 4, 2022, Engineering Report:

One item NOT included in the report is the recommendation to install TS60-RRFB LED Rectangular Rapid Flashing Beacons (RRFBs). RRFBs are used to supplement warning signs at uncontrolled intersections or mid-block crosswalks. RRFBs feature flashing, high-intensity LEDs that alert motorists that pedestrians are using the crosswalk. Studies have shown that RRFBs significantly increase driver yielding behavior and are approved by the Federal Highway Administration.

RRFBs are placed on both sides of a crosswalk below a pedestrian crossing sign and above an arrow sign that points at the crossing (see image above). Pedestrians can manually activate RRFBs with a push-button or passively with photo-sensor bollards.

On January 20, 2022, Toll Bros sent a new letter outlining revised plans for its "413 Plan" to build 45 single family homes on approximately 158 acres of the All Saints Cemetery property located along Twining Bridge Road near its intersection with Durham Road (S.R. 413). The new plan specifies access ONLY via North Drive. That letter was sent to over 1,800 residents in the area. This will be discussed at a Board of Supervisors (BOS) Executive Session on Wednesday, February 9, 2022, prior to the regular BOS meeting.

The two most recent plans are shown in the figure below. Panel A, circa September 2021, shows access via Municipal Drive. After protest from Delancey Court residents, this plan was abandoned by Toll Bros in favor of Plan B with access via North Drive only, which was summarized in the January 20, 2022, letter. 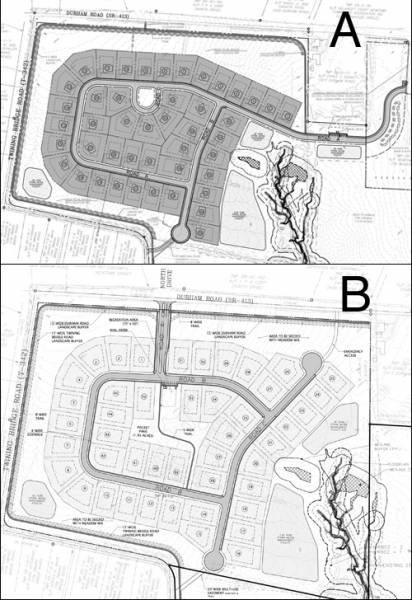 Meanwhile, as of February 4, 2022, six emails from residents opposed to Plan B was received by the Supervisors.

I asked the township solicitor what would happen if the BOS voted against the settlement?

His response was that if the Board votes against this settlement, the matter will proceed to court where the Township’s case is “thin based on the Board’s denial of the developer’s conditional use application.” If the Township loses in court, the Township would lose the almost 99 acres of open space that Toll is required to offer to the Township as part of the settlement. He also mentioned that there will be less preserved agricultural land – I’m not sure how he determined that. He also suggested that the original two (2) accesses out to Twining Bridge Road that received a great amount of public outcry when first proposed would return, there would be no perimeter trail system, and there would be larger lots spread out over more of the property that would encroach much more significantly on Twining Bridge Road neighbors.

Arcadia’s Highway Occupancy Application #148702; U-Turn on Buck Road (SR 532) and Mill Pond Road. PennDOT required “written evidence, prior to the issuance of a permit, that Newtown Township is aware of the project and has had the opportunity to comment. Provide written evidence (e.g. municipal engineering review, council or planning commission meeting minutes, executed TE-160, etc.), which is less than one year old, to satisfy this requirement.”

On November 15, 2021, Arcadia submitted a response to PennDOT in which it said:

“A copy of the latest Township review letter is included with this submission. Additionally, the email address for the Township Manager (Micah Lewis) has been added in EPS as Additional Email Address 2.” The letter Arcadia is referring to is from RVE dated May 25, 2021, which is months BEFORE Arcadia submitted its HOP plan. Also, that letter does NOT mention “Highway”, “HOP”, “PennDOT”, “Traffic”, or “U-turn.”

At the November 23, 2021, BOS meeting, I noted that this letter does NOT satisfy PennDOT’s request and the HOP plan should be discussed in a public meeting. I suggested that the Planning Commission (PC) would be a good venue for this. The BOS agreed and directed the PC to review the Arcadia HOP application with the hope that comments from the PC would be submitted to PennDOT to consider.

The Newtown Planning Commission reviewed the HOP application and submitted their comments to the BOS on January 12, 2022:

“The Planning Commission members had a great many concerns about safety in all directions, especially at peak AM and PM hours when traffic tends to back up in all directions. The addition of sixty new homes will add to an already congested situation. The members did not look favorably on this plan. There are concerns that drivers may become impatient if there are delays and fail to wait for the signal for a U-turn. Because the entrance to the site is so close to the Bypass, Commission members also had concerns about cars attempting a left turn into the site and cars exiting the site as traffic proceeds from the Bypass to Buck Road at higher speeds.”

I communicated this decision via email to Mr. Francis Hanney, PennDOT, who responded: “Our comment is required and a good idea to make sure we know what the township’s concerns, comments may be but in reality we are well aware that the township knows all about this project.  We very much appreciate hearing from the PC and Township generally… It’s unfortunate that a better compromise could not be worked out with the access.”

Peter Ancona, VP of the Newtown Crossing Community Association, sent a request via email to the supervisors on February 7, 2022. 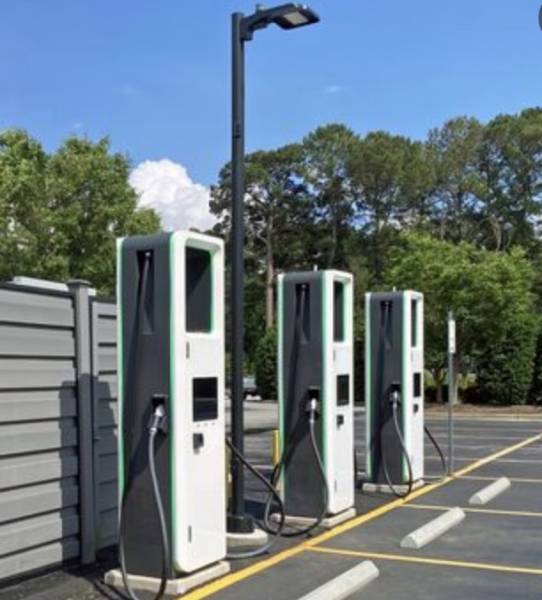 On January 18, 2022, the Newtown Planning Commission reviewed a variance application to permit the installation of three (3) electric vehicle charging stations (G-16 use), which is not a permitted use in the LI District and would require relief from the parking standards. See below for the location of these proposed charging stations.

These charging stations will be for shared use by hotel guests, the office complex, and any member of the public.

This PC stated: “The Commission is recommending that the Supervisors support the application with some documentation on the use of the charging station and the impact of the loss of the parking spaces, as well as any other traffic issues, like queuing to use the charger.”

The Newtown Zoning Hearing Board unanimously approved this application at its February 3, 2022, meeting.

I did not attend that meeting, but I was very interested in hearing comments from the ZHB members regarding this use because I hope to propose that the JZC create a specific JMZO use for electric vehicle charging stations.

Generally, the ZHB felt that any opinion that the spaces with the electric chargers reduced available parking was erroneous. The loss of three parking spaces was not considered significant because the applicant believes that there are 50 open spaces at any time.  The three stations are in a location of the lot where as not to disturb usual parking spaces, and any line would not disrupt traffic flow.

“I don't recall anything being discussed on queuing issues to use the charger,” said one member. “We concluded that this might come up frequently in the future given the increasing footprint of electric vehicles.”

An electric car charging station is not a use enumerated in the Newtown Area Joint Municipal Zoning Ordinance. According to one ZHB member, “there was a discussion about the need for an ordinance on this topic. Mr. Blackburn, the attorney for the applicant, suggested that more requests would soon be submitted…As I learn more, I now think additional details will be needed in the future.  For example, how long does it take to charge a car?  How much room is needed for charging/pulling in/out?  Do we have to think about charging stations in the same way that we think of gas stations?”

“With regard to the installation of the 3 EV charging stations,” said another ZHB member, “yes there is currently no guidance in the JMZO and I do look forward to that being amended in the JMZO, hopefully in the near future as I envision that this will certainly become a more common occurrence.”

What to Spend ARP Funds On

On January 6, 2022, the United States Treasury released the Final Rule for the use of American Rescue Plan (ARP) Funds for municipalities. Highlights of the Final Rule include:

The Newtown Township staff has evaluated current capital needs with the strategy of maximizing effective use and life of proposed capital projects and equipment; maximizing public benefit; reducing current and future maintenance costs; and enhancing the services offered by Newtown Township. Here are a few of the items included in the staff "wishlist":