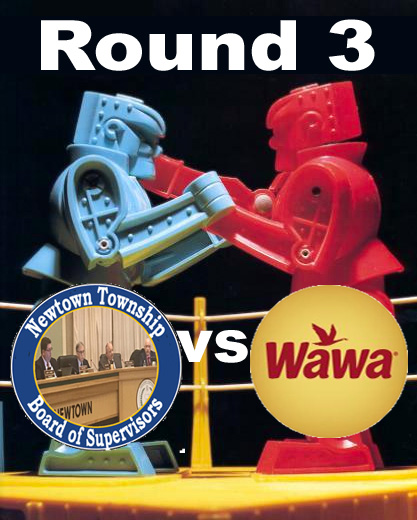 The Newtown Zoning Hearing Board (ZHB) hearing to determine the fate of Provco/Wawa’s requests for variances continued on August 18, 2021.

Specifically, Mr. Babbitt presented his opinions of Wawa's request for 8 fueling stations where only 6 are allowed. He also weighed in on the signage issue. Provco/Wawa attorney John VanLuvanee cross-examine Mr. Babbitt and had his own witness counter Mr. Babbitt's testimony.

It is my professional opinion that not one of the requested variances from Zoning Ordinance provisions is warranted," said Mr. Babbitt. "The subject site has no unique physical circumstances or conditions that render it impossible to be developed in strict conformity with the Zoning Ordinance, and no variance is necessary to enable the reasonable use of the property."

With Regard to Fuel Pumps: Mr. Babbitt testified that there are numerous other gas stations (including several Wawa convenience stores with fuel pumps) that have only six fuel dispensers. Out of the 20 Wawa establishments with fuel in Bucks County that Mr. Babbitt found on the company’s web site (www.wawa.com), 70% (14 sites) have only six fuel dispensers. All are recently developed sites in Bucks County communities noted Mr. Babbitt. [Read Mr. Babbitt's July 8, 2021, Report for the list of sites and other details.]

"Without question," said Mr. Babbitt, "six fuel dispensers is the typical number for Wawa establishments in Bucks County, and it is clear that Wawa can operate a successful establishment with only six."

With Regard to Signage: In all, the applicant proposes 22 signs totaling 249.72 square feet in area. "Similar to the perspective on the number of fuel dispensers," said Mr. Babbitt, "it is my professional opinion that there is no hardship and therefore no grounds for any of the sign variances requested. There are no 'unique physical circumstances or conditions peculiar to the particular property' that warrant the sign variances."

There was much discussion of the placement of signs and how the signs would be illuminated and modified remotely. These issues have been discussed ad naseum in the previous hearings noted above.

For the details in support of Mr. Babbitt's testimony, please read Mr. Babbitt's July 8, 2021, Report, which is also embedded at the end of this post.

No decision was made at this meeting and the hearing was continued to September 20, 2021, to hear PUBLIC COMMENT on this issue. Although public comments are not part of the official transcript, comments can help sway the decision of ZHB members.

According to the PA Municipal Planning Code, "The board or the hearing officer, as the case may be, shall render a written decision or, when no decision is called for, make written findings on the application within 45 days after the last hearing before the board or hearing officer."