How Well Off Are We in Newtown?

When going door-to-door canvassing, most people feel that Newtown is a very nice and prosperous place to live and it's difficult to find much to complain about. The data below confirms exactly how well off we are! But there are some issues that are on the minds of voters that should be addressed to make Newtown an even better place to live! For more on that, read "Newtown Speaks Out on the Issues".

Click on the title in the article below to see the data for the 18940 zip code.

The Newtown Township Hatfields Versus the Borough McCoys! 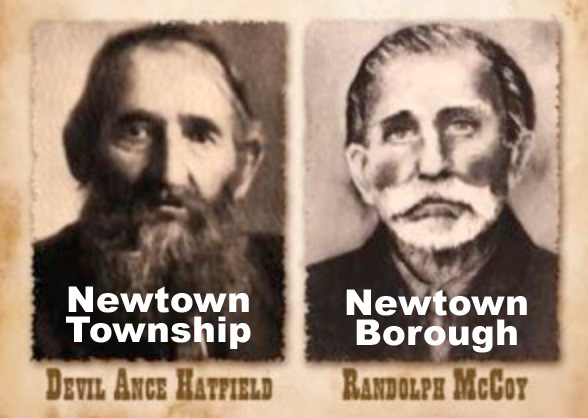 Usually, meetings of the Newtown Township Board of Supervisors (BOS) are sparsely attended, by which I mean no attendance by the public at all! Not so at the April 12, 2017, meeting where it was standing room only in the public meeting room at 100 Municipal Drive.

The issue that brought all these people to Town Hall was the Irish Festival hosted by the Green Parrot Pub on Sycamore Street over the Saint Paddy’s day weekend. The main points of contention were the “noise” – aka loud music – and dearth of parking spaces during the 4-day festival.

About a dozen “Pro” and “Anti” festival people lined up to speak their minds before the hapless BOS. The first speaker was a Newtown Borough resident living on the east side of Sycamore across from the Parrot, which is on the west, Township side of Sycamore.

And there lies the rub. We have a Hatfield versus McCoy situation in Newtown. The Township Parrots are the Hatfields and the Borough Residents are the McCoys! Anyway, that’s how the debate unfolded.

[For a more detailed account of the public comments, read the minutes here.]

[For news coverage of the event, including additional comments from me,

Cherie Peters of the Borough McCoys started off the debate accusing the Parrot Township Hatfields of “driving her crazy” with four days of “constant pounding, pounding, pounding.” And when she complained, the “pounding” just got louder.

Deacon Harold Vereen of Macedonia Baptist Church in Newtown Borough also complained about the “pounding” and, in a Christian manner, asked that it begin at 12:30 p.m. after church services on Sunday. The request seemed reasonable for a town claiming to be “A Great Place to Live, Work, and Worship.”

One “pro” speaker likened Newtown Township to a doughnut and Newtown Borough to the doughnut hole. I’m not sure if that analogy helped his argument or not, but it re-enforced in my mind the divisions between the two municipalities that go beyond noise issues.

Several Hatfields noted that Newtown is not a “one-horse” town any more and is more modern than during the days of their youth. Which brought up another division – between older residents and younger ones. The Hatfields are younger and wish Newtown had more activities like the Irish Festival that attracted a young crowd. The older McCoys cherish peace and quiet.

Then there are the business interests. Resident Gabriel Marra, owner of Newtown Pizza – a McCoy by virtue of being on the east side of Sycamore - brought up the issue of parking and rowdy behavior that negatively impacted his business. He and others suggested that the Township provide off-site parking and shuttle buses to bring people to the festival. I’ve been to plenty of other “festivals” that provide such an amenity.

Speaking of location, location, location – Lower Makefield resident Jim Dougherty, a real estate agent with a vested interest in Newtown property values, suggested that the Irish Festival did more than anything else he could think of to raise the value of property in both Newtown Township and Newtown Borough.

Although the real Hatfield and McCoys did their utmost best to kill and maim each other in their feud, the Newtown Hatfields and McCoys were relatively civil. I think the Newtown Township Board of Supervisors heard some good and reasonable suggestions for mitigating the concerns of the McCoys. Hopefully, the result will be a better Irish Festival next year.

Now that La Stalla Deli is open on Sycamore Street, let’s talk about an Italian Festival!