Newtown Township 2021: The Year in Images

Important (or Not) Issues

For more than 4 years now, I have been hosting my “Issues of Importance to Newtown Township Residents” survey. In 2021, 145 people responded as shown here. Interestingly, fully one-third of respondents do not think attracting new business to Newtown is important. See more detailed survey results.

The Importance of Good Communications 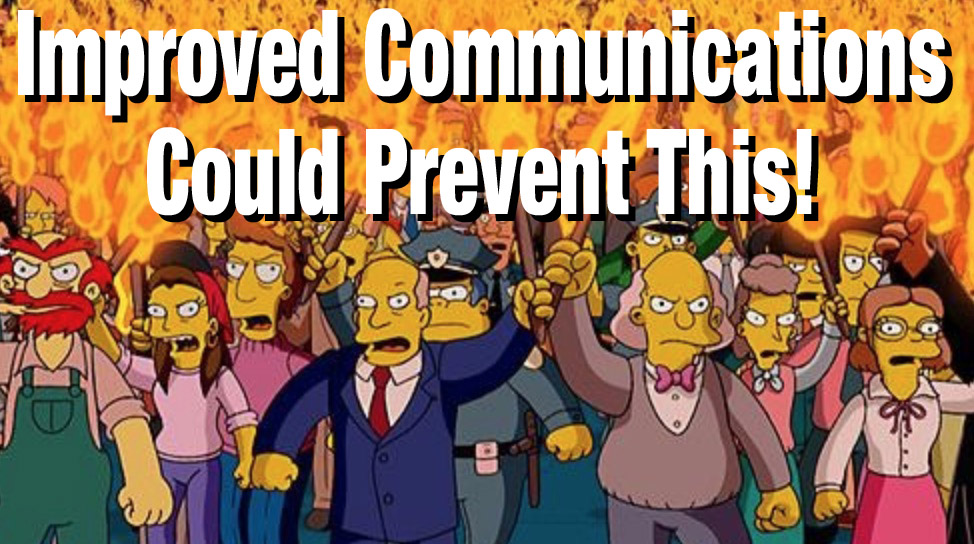 Considering that the website is the main way that the township communicates with residents, it is crucial that its usability be improved. As Peter Drucker, who was arguably the world's greatest management consultant, famously said, “If you can’t measure it, you can’t improve it.” See a Google Analytics Report for the township website for the period of Apr through Sep 2021.

Over 200 Newtown Area Residents Have Signed My Petition

There is no need to put the public at risk during these troubling times. Many residents overwhelmingly support "hybrid" public meetings that make it easier for them to attend important public meetings such as BOS meetings by giving them the option to not only attend in person but also to attend virtually via Zoom or some other remote technology.

COVID restrictions are gone - for now - & Newtown Township returned to 100% live in-person meetings. Not everyone is comfortable with that. If you agree, I urge you to sign my Petition to the Board of Supervisors.

It was a sad night at the 8 September 2021 Newtown Board of Supervisors meeting.

In a comment before the BOS, Newtown Grant resident John D’Aprile was of the opinion that the township should not spend money on hybrid meetings so that “lazy” residents can attend. “Why should we cater to someone who is lazy and does not want to come to meetings?,” quipped Mr. D’Aprile. Quote/Unquote! Read more about this, plus see more positive comments from residents.

Was the Process Flawed?

The Preliminary Budget saw the light of day, was advertised – aka, “hung” – on or about 15 November 2021. This was the first opportunity for residents to see the budget in all its glorious detail! The Board of Supervisors approved the final budget on 8 December 2021 without any significant changes!

My “Budget Cut Survey” asked respondents to select the cuts they would support in order to maintain fire protection while ensuring an adequate reserve fund for unanticipated expenses without dipping further into the General Fund.

At the 22 November 2021 Meet Mack Monday Zoom meeting, residents discussed traffic and pedestrian safety issues on North Sycamore Street near Silo Drive in Newtown. There was a lively discussion that included several ideas for mitigating the danger to both pedestrians and drivers,  including suggestions by Police Chief Hearn.

It is clear that Newtown area population growth is declining, especially between 2010 and 2020. 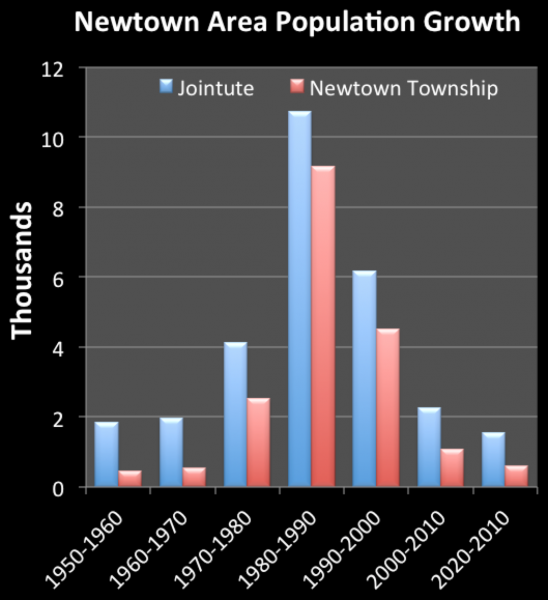 The racial/ethnicity profile of all three Jointure townships show a shift to a more diverse population from 2000 to 2020. Newtown, for example, was 94% white in 2000 and 82% in 2020. The biggest change was in the “Asian Alone” category – an increase from 734 residents in 2000 to 2,201 in 2020. This category includes “Asian Indian,” which I am sure constitutes the majority of “Asian Only” residents in Newtown. Read "Report by BCPC to Jointure on 2020 Census Population & Housing Data" for more information.

This Type of “Mixed-Use” Zoning is All the Rage Now

Seth Shapiro, Director of Planning and Urban Design at Barton Partners, was a guest speaker at the April 1, 2021, Newtown Economic Committee Zoom meeting. He focused on the problems of "Euclidean Zoning," which is a system of zoning whereby a town or community is divided into areas in which specific uses of land are permitted.

The Future of the Newtown Bypass In Doubt

Keeping the rural look of the Newtown Bypass has been a tradition in Newtown. It is a common belief among long-time Newtown area residents that the Newtown Bypass is supposed to remain an "undeveloped" greenway. But Wawa on the Bypass may set a precedent for more development. 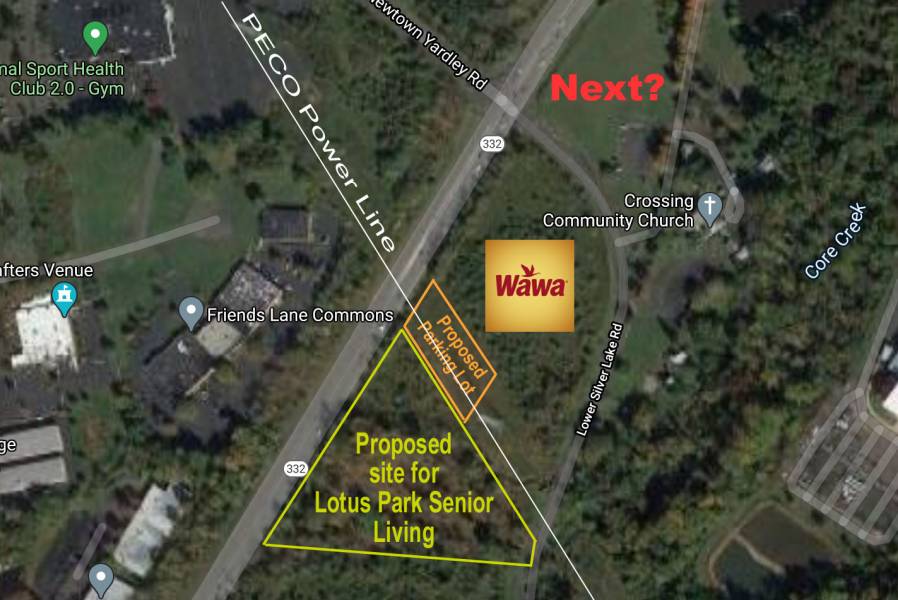 At the March 15, 2021, Newtown Board of Supervisors Work Session representatives of Lotus Park Senior Living LLC, presented a "sketch plan" for a Senior Living facility to be located adjacent to the site of the already approved Wawa. When the owners saw an opportunity presented by the Wawa precedent, they proceeded to find a use for a plot of land that many experts consider unfit for development. Crossing Community Church may be next to sell to a developer.

PennDOT Opposed All Other Options!

On 9 September 2021, Francis Hanney, Senior Manager at PennDOT’s Traffic Services Division, hosted an online meeting with residents to discuss road improvements to facilitate access and egress to the approved Arcadia Green development at the intersection of Newtown Bypass and Buck Road. Mr. Hanney explained why the U-turn is the best option.

I dubbed this the “penis road” option.

Specific complaints from residents regarding this plan included: (1) the planned access to Durham Road via Municipal Drive was unsafe, (2) a 2008 Durham Road Traffic Study concluded that the preferred access to Durham Road from any development in the area is North Drive, and (3) the Township should not be giving up public land to allow access to Municipal Drive. Eventually, the residents won out and a new plan was put forward with access via North Drive as recommended by PennDOT. More about this...

How Not To Apply For Variances

At it's January 13, 2021, public meeting, the Newtown Board of Supervisors voted 3-2 against agreeing to a settlement with Newtown Bucks Association regarding Chick-fil-A and a "retail pad" in the Newtown Shopping Center. The supervisors, however, would have liked to approve a plan to mitigate traffic lining up for Chick-fil-A. The applicant, IMHO, could have avoided this by submitting 2 separate applications.

Federal Agents With Help From the Newtown Township Police Department Raid KVK Tech Locations at the Crack of Dawn!

On Thursday, 29 July 2021 Federal Agents from the US Food & Drug Administration (FDA), Homeland Security Investigations (HSI), The Department of Labor, US Health & Human Services & other Federal branches raided each of the KVK Tech facilities located within Newtown Township.

The trails have been closed to the public for 4 years due to trees killed by an insect known as the Emerald Ash Borer.

The trails were closed “indefinitely” to the public in the spring of 2017 due to the hazard of falling dead ash trees along the trails. But after 4 years of inaction, some people believe it is time to have a plan to do what is necessary to open these trails again to the public. Read "Can We Open the Clark Nature Center Trails?"

Thanks for Viewing. STAY SAFE! 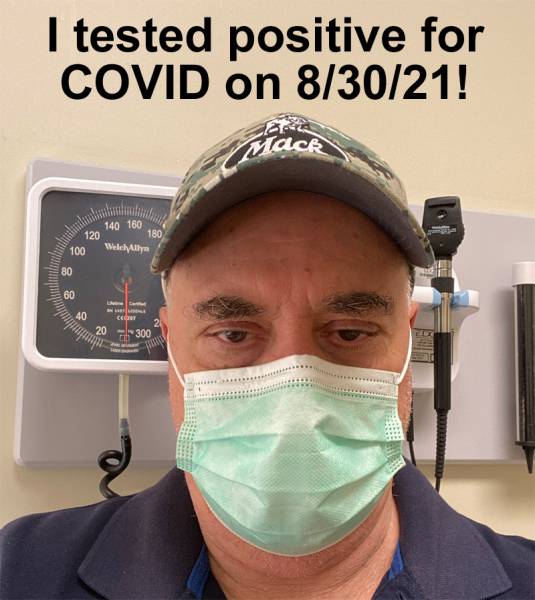 Billed as the “the greatest weekend of the year in Newtown” by some, the 8th Annual Newtown Irish Festival reached its crescendo in the outdoor tent at the Green Parrot Restaurant & Pub on St. Patrick's day.

Other people, including some nearby Newtown Borough residents, do not think the festival is so great (watch this short video clip of the pro and con debate before the February 14, 2018, Board of Supervisors meeting). I’ve even heard criticisms that the Festival brings “drunken hooligans” into our quiet, peaceful town!

I’m not of Irish descent, but like everybody else, I’m Irish on St. Paddy’s Day. This year my wife and I decided to join the celebrations.

First, on St. Patrick's day eve, we attended a concert by Larry Kirwan at the Zlock Performing Arts Center on the Bucks County Community College campus.

Through a mixture of story-telling, acting, and singing Kirwan brought Irish history alive with emphasis on The Great Hunger of 1847, Emigration to America, The Celtic Revival, 1916 Uprising, and the recent “Troubles.” Kirwan ended the concert with a call for a united Ireland!

But I just had to see – and hear – for myself what all the hubbub was about regarding the Newtown Irish Festival. So, my wife and I decided to use all my “influence” – i.e., a $23 Event Bright ticket – to get into the tent on Saturday night around 6 pm.

I guess you could say that the crowd was “motley.” But I would also say they were polite as we wended our way through the crowd to reach the bar and order a couple of beers. We then had to squeeze through more attendees to get to a spot where we could see the band and claim a few square feet of floor space.

The music was loud and punctuated with more or less “relentless pounding bass” that encouraged some people to dance and many to sing along to favorite “Irish” songs like “Take Me Home, Country Roads” by John Denver! The following clip may be more representative of Irish songs sung at the festival:

At the Green Parrot Irish Festival in Newtown.

I’ll have to wait and see if there was any police action – I certainly did not see any rowdy behavior when I was there. What I did see was a bus that provided free transportation to anywhere within 3 miles of the event. I also saw that the surrounding restaurants were crowded with long waits to get seated. When we asked how long the wait was at the Sycamore Grill, we were told “longer than you want to wait.”

I applaud the owners of the Green Parrot as well as the neighbors in the Borough for reaching a compromise regarding this year’s Festival; namely, accepting a 2-day permit for the outdoor portion of the event rather than four days as was originally planned. Nevertheless, the Festival lasted 4 days – 2 days inside on the porch and 2 days outside in the tent.

The Newtown Dems participated in this annula event. My wife and I enjoyed it very much. Here are just a few photos I took and posted to my Instagram account.

[With apologies to Chicago ~ I'm a Man]

Our kids are addicted to drugs made right here in town

We are in debt up to our necks, can hardly pay our bills

Our open space may soon dwindle,

And our water may be tainted.

And thought things were fine with “fat cats” in power

I had no time for complaining or campaigning

'Cause my time was all used up with kids & work.

Today, I walk outside canvassing

All the groovy kinds of residents

I'm a Newtown man, yes I am and I can't help but love Newtown so.

If I had my choice of matter

I'd rather be with the big “fat cats”

All engrossed in money-making chatter

Showing where their minds are at.

But I resist that route, ‘cause

I've got to keep my principles

And fight to make Newtown better!

I’ll never drop upon my knees

And help keep the “fat cats” in power

You think that I'm not qualified or that I am afraid,

But I've never had no problems

'Cause my cause and my heart are pretty strong.