Newtown Township has been a designated bird town community for many years, regularly sponsoring events to promote conservation. In 2019 the Newtown Environmental Action Council (EAC Definition) and the Pennsylvania Audubon’s Society will be jointly developing and implementing a new program promoting the use of native plants to support bird population.

At the November 28, 2018, Board of Supervisors meeting, a plaque was presented to George Skladany, member of the EAC, to commemorate 2018 as the hundredth anniversary of the signing of the Federal Migratory Bird Treaty Act, protecting migratory birds for many decades.

The Township also passed the “Year of the Bird” Proclamation, which states:

Whereas, Birds symbolize nature’s interconnectedness and the importance of caring for our shared planet; and

Whereas, Each spring and fall hundreds of thousands of migratory songbirds fly through Newtown Township and are sited at Tyler State Park, Clark Nature Center, and Hidden Lake; and are counted by local bird watchers; and

Whereas, Over 160 species of birds are recorded in Newtown Township and many of these migrate through or are residents of the township that they use for food and shelter; and

Whereas, Six species of birds that are listed on the Conservation Network as “Birds of Concern,” in need of conservation actions, are recorded in Newtown Township including American Kestrel, Wood Thrush, Canada Warbler, Willow Flycatcher, Black‐throated Blue Warbler, and American Woodcock; and

Whereas, Birding Activities bring people into Newtown Township and aid the economy, an example of where birds thrive – people prosper; and

Whereas, Climate change is the number one threat to birds; and

Whereas, 2018 is the centennial year of the Migratory Bird Treaty Act which protects birds in our backyards, like the Wood Thrush and Eastern Towhee; and

Whereas, 2018 also marks the beginning of the next 100 years where we will continue to protect birds and the places they need.

SO PROCLAIMED, We, the Newtown Township Board of Supervisors, by virtue of the authority vested therein, do hereby proclaim 2018 the Year of the Bird and urge all citizens to take due note of the observance and to support the spirit of this proclamation for years to come.

According to a recent article in The Intelligencer, “for the fourth time in as many years, Elcon Recycling Services is resubmitting application materials in an attempt to build a controversial waste treatment facility in Falls” about 13 miles from Newtown (read “Elcon Reapplies to DEP for Toxic Waste Facility Located Next to Delaware River”).

“Groups such as Bucks POWA [Protect Our Water & Air] and the Delaware Riverkeeper Network say they’re specifically concerned about toxic materials being released to the air and potential drinking water contamination should an accident or flood release chemicals into the nearby Delaware River.” 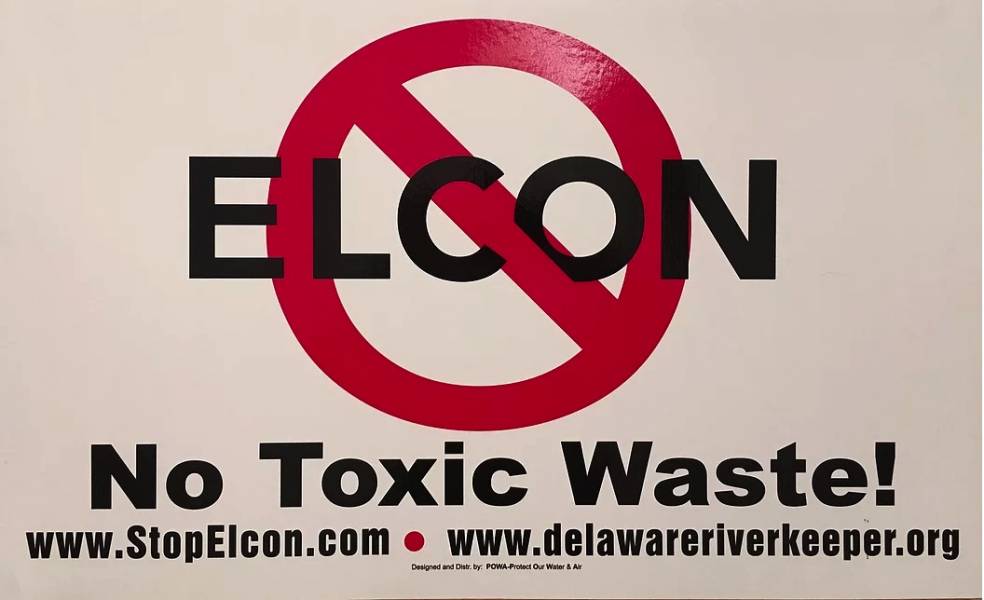 On May, 11, 2016, the Newtown Board of Supervisors adopted Resolution 2016-R-10, opposing the Elcon Toxic Waste incinerator. The Resolution, which can be found at the end of this post, makes several claims.

No citations of the “studies” mentioned in the Resolution were included in the wording. Perhaps this resolution should be amended to include the evidence for such claims and updated with new information to make it stronger. This, IMHO, would help get the issue before the public again and reaffirm Newtown’s opposition to this incinerator.

It May Take Lawsuits to Stop the Elcon Toxic Waste Incinerator

A Resolution of the Board of Supervisors of Newtown Township in opposition to the Elcon Toxic Waste Incinerator Plant at the Keystone Industrial Park in Falls Township, Bucks County, Pennsylvania

WHEREAS; Eleon Recycling Services, an Israel based company, is applying to build a hazardous waste incinerator plant in the Keystone Industrial Port Complex in Falls Township, PA, 800 yards from the Delaware River, which is 13.5 miles from Newtown, PA; and

WHEREAS; air pollutants can travel 100 miles. The air quality is adversely affected within a 30 mile radius and can affect people with allergies, asthma, auto-immune disorders, elderly with COPD, and heart conditions; and

WHEREAS; The Pennsylvania Department of Environmental Protection has stated that this will be a commercial hazardous waste treatment facility that will treat liquid waste from the chemical and pharmaceutical industries; and

WHEREAS; the plant will process 210,000 tons of raw wastewater per year that will include extremely high levels of Mercury, Cadmium, and Lead; and

WHEREAS; studies show that after treatments, the waste will still contain unacceptable levels of Mercury, Cadmium, and Lead; and

WHEREAS; Elcon recycling only has plants operating in Israel and has been denied in other countries due to environmental issues created by such treatment plants; and

WHEREAS; Elcon Recycling's Haifa Bay plant in Israel, due to its history of violations of air and groundwater emissions, and its negative impact and pollution to the surrounding environment in Haifa Bay, has been ordered to shut down and relocate to a remote desert location in Israel; and

WHEREAS; given the extremely close proximity to the Delaware River and located in a high residential population where over 10,000 children attend school within 4 miles and due to the high possibility of spillage, pollution would affect the Delaware River to the Chesapeake and beyond; and

WHEREAS; the Philadelphia Water Department wrote in their testimony to the Department of Environmental Protection to decline permit to build in this location. The

PWD stated that if a leak or spill were to occur, it would be a Catastrophic Event that would affect millions of people's water supply and would cause the termination of drinking water for an indeterminate amount of time; and

WHEREAS; the Delaware River is a primary source of drinking water and recreation; and

WHEREAS; while the Newtown Township Board of Supervisors realizes the need for proper disposal and treatment of all toxic waste generated, it needs to be done in a safe location with the least impact to human and wildlife populations and the surrounding local supporting eco systems of such; and

NOW, THEREFORE, BE IT RESOLVED, by the Board of Supervisors of Newtown

Township, Bucks County, PA, that it does hereby oppose the construction of this facility and further urges the Pennsylvania Department of Environmental Protection Agency and the Falls Township Board of Supervisors to consider the danger of the proposed hazardous "thermal oxidizer" facility at the Keystone Port Complex in Falls Township to Newtown residents and Delaware Valley residents.

As you may know, it was recently reported in Newtown Patch (February 14, 2018) and other local news outlets that a Merck chemist allegedly stole potassium cyanide – a highly toxic chemical – and dumped it down a public stormwater inlet in the area of County Line and Street roads, between Easton Road and Second Street Pike. Depending on where the chemical was allegedly dumped, it would've been discharged to either Neshaminy Creek or Pennypack Creek, police said. This happened in December, 2017. Read more about it here.

Many people have commented online that authorities should have warned them sooner. "So if this happened on December 15 why are we just now hearing about this?," said one commentator.

I spoke to Daniel Angove, Assistant General Manager at the Newtown Artesian Water Company, who assured me that this was never a threat to Newtown’s water supply because the company purchases water north (upstream) from where the chemical was dumped

“There never was concern about our water,” said Angove, “and if there was, our customers would be the first ones to know.”

He went on to explain that the company has a reverse 911 system for immediate threats. This would place a call to everyone who has their information in the system. If it were a less serious, localized problem, the company would hang information on doors in the affected neighborhoods as well as use news outlets and social media to notify people. “People would know and they wouldn’t have to wait and learn about it in Newtown Patch” weeks afterward, said Mr. Angove.

I'm not sure what "social media" Angove is talking about. There are no social media links on the company's website and very few posts - none recent - on its Facebook page.

Mr. Angrove told me that he was willing to come before the Newtown Board of Supervisors on an annual basis to give a status on the water system. Recall that upon the request of the Newtown Board of Supervisors, Mr. Angove reported on the quality of water and concerns of carcinogens based on a newspaper article published in the August 4, 2017, issue of the Bucks County Courier Times. Mr. Angove discounted an independent study that found 7 carcinogens - including chromium-6 that was featured in the movie "Erin Brockovich" - in Newtown's water. Read more about that here.

Be on Look Out for the Spotted Lanternfly!

As reported in the Q1 2018 issue of Townships Today newsletter: 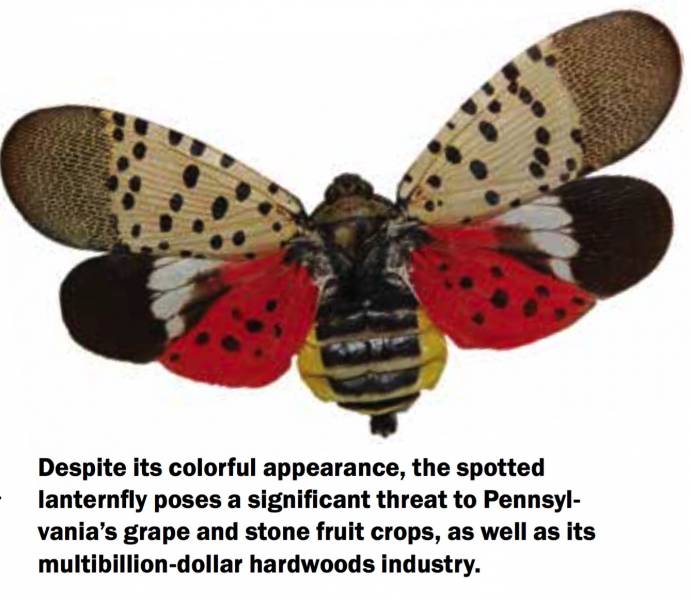 Here we go again. First, it was the emerald ash borer that marched relentlessly from west to east across the commonwealth, leaving a trail of decimated ash trees in its wake. Now, the spotted lanternfly is threatening to spread from southeastern Pennsylvania and could wreak even more havoc than the ash borer.

According to the state Department of Agriculture, the pest poses a signicant threat to the grape, apple, and stone fruit industries, worth nearly $175 million, as well as the state’s $12 billion hardwood industry.

Consequently, the U.S. Department of Agriculture awarded the state nearly $3 million last summer to fund control efforts and public outreach. With 13 southeastern counties under quarantine, state legislators have requested an additional $20 to $40 million in federal funding to combat the insect.

[Note: The U.S. Department of Agriculture announced in February, 2018, it is awarding $17.5 million to try and stop the spread of the invasive spotted lanternfly in southeast Pennsylvania. See the story here: http://sco.lt/6A0Ksj]

Municipalities in the quarantined counties have been asked to alert residents and post signs and information about how to recognize the spotted lanternfly. The goal is to minimize the risk of the insect leaving the quarantined area.

Given that insects don’t recognize quarantines, it is a good idea to get educated about this invasive species and watch for its arrival in your community.

Note: At the October 16, 2017, Budget Presentation before the BOS, Township Manager Kurt Ferguson, estimated that between 800 and 1,000 ash trees in the Clark Nature Center have been killed by the ash borer. These dead trees are a hazard to hikers and therefore the Township closed the hiking trails in the park.

“Quite honestly,” said Ferguson, “we probably need a million dollars to take the trees down.” Meanwhile, the budget allows for only $15,000 per year. Some trees near activities have been taken down for safety reasons. But in the end the trees have to be removed not just taken down if this is going to be a useable beautiful space. Ferguson promised to come back with a long term strategy to deal with the situation.

As reported in the September 14, 2017, issue of the Bucks County Courier Times, he Delaware River Basin Commission (DRBC) passed a resolution that would ban fracking but allow fracking wastewater to be stored or discharged in the Delaware River basin, which totally negates the ban according to environmentalists. Former PA Department of Environmental Protection secretary John Quigley said "It would be inconsistent at best to allow a ban and consider wastewater. It just doesn't make sense."

Despite the pleas of several residents to hold off, the Newtown Planning Commission approved a recommendation in December, 2016, to advertise a proposed ordinance aimed at limiting the opportunity for fracking in the township if a current moratorium is lifted. See video of a Delaware Riverkeeper Network meeting (January 2017) on the fracking ordinance proposed by the Newtown, Wrightstown and Upper Makefield Jointure.