By now, Newtown Township, Newtown Borough, and some Middletown residents have received a letter from the Newtown Artesian Water Company (NAWCO) alerting customers that “a recent round of [water source] samples have shown detectable limits” of Perfluorinated Compounds (i.e., PFOS and PFOA Definition) aka PFAS.

Previously, at the August 8, 2018, Newtown Board of Supervisors meeting, Dan Angove, the NAWCO’s Assistant General Manager, reported that the levels of these compounds in Newtown’s drinking water was “nondectable”; i.e., below 5 parts per trillion (ppt).

The letter does not mention the exact amounts of these contaminants in recent samples but refers residents to the NAWCO website (www.newtownwater.com) to find the results of measurements. The following chart is based on that data. 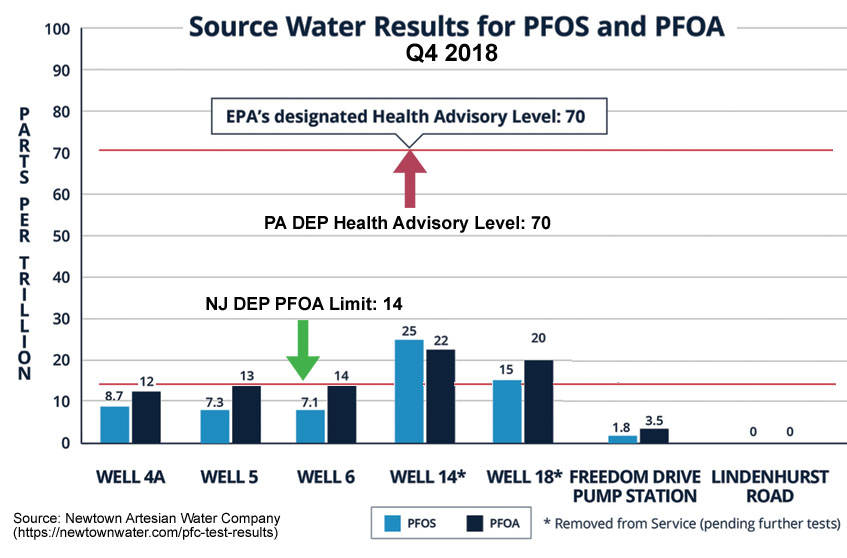 NAWCO complies with the PA Department of Environmental Protection’s “safe” level of 70 ppt for these contaminants – the same as the U.S. EPA’s designated Health Advisory Level. This limit has been widely criticized. As reported recently in the Bucks County Courier Times newspaper (here), State Sen. Maria Collett, D-12, of Lower Gwynedd, introduced a bill that would establish a 10 ppt drinking water limit for PFOS, PFOA, and two other chemicals. New Jersey already set a limit of 14 ppt for PFOA and 13 ppt for PFOS. Some scientists call for a limit as low as 1 ppt.

Despite declaring the water “safe” by PA DEP standards, the NAWCO – out of an abundance of caution – removed from service two sources of water (wells 14 and 18) “pending further tests.”

One has to wonder, however, if the levels of these contaminants in Newtown’s drinking will increase rather than decrease. The U.S. Navy is investigating the migration paths of PFOA and PFOS in the ground water originating from the Naval Air Station and Horsham Air Guard Station in Willow Grove and former Naval Air Warfare Center in Warminster [see story embedded below]. “(The base) is on an elevated plateau, so water will pretty much discharge in every direction,” a project manager with Navy environmental contractor Battelle said.

PFAS From Tainted Water on Military Bases My Be Spreading to Other Towns in Bucks, Montco