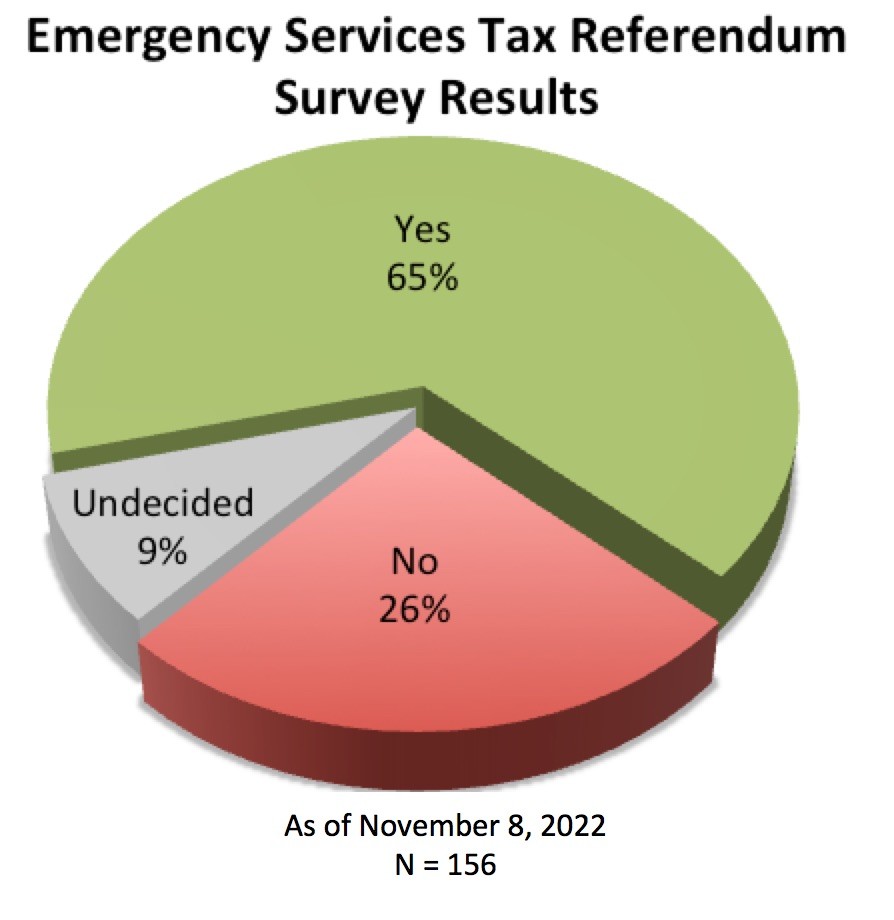 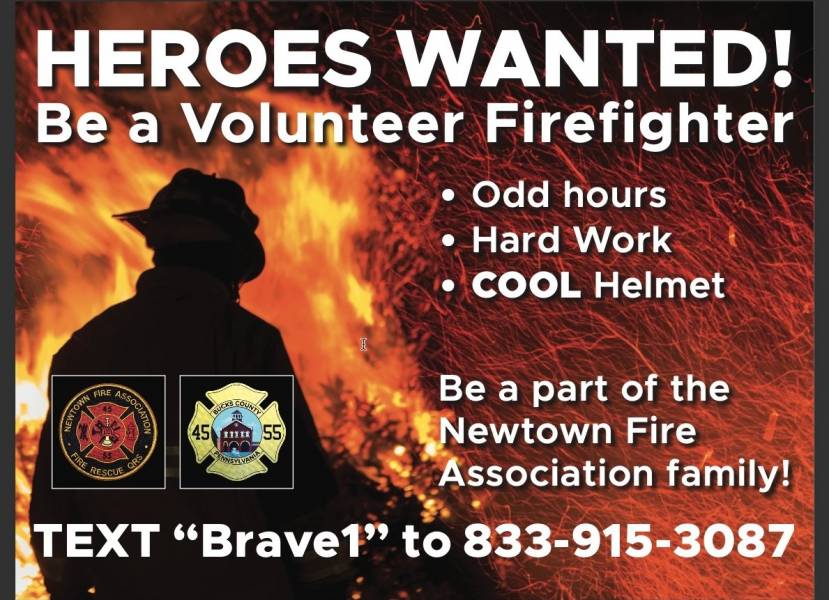 It’s no secret that attracting and retaining volunteer firefighters is a growing problem not only in Newtown, but also in Bucks County, Pennsylvania and the United States in general.

The Chief also appeared before the Newtown Township Board of Supervisors (BOS) at the October 18, 2021, Newtown Township 2022 Budget Presentation meeting. He answered my question about how the $330,000 donation to the Newtown Fire Association (NFA) in the Township Manager’s recommended 2022 budget will be used.

To pay for this and other fire expenses - mostly for the cost of hiring a new Deputy Fire Chief - the Township Manager recommended a new 1.5 mil tax increase to be added to the Fire Protection Fund.

I wanted to get more details so I met with Warren Dallas, president of the NFA who went over the numbers with me. Here is the plan, which is an attempt to increase volunteer firefighter responses to fire calls and add some staffing reliability, especially for low turnout times.

*NOTE: For the second year in a row, Newtown Township failed to get a FEMA SAFER Grant to cover the cost of hiring 5 new firefighters to cover weekends. The grant would have covered this expense for 3 years. Read “The Future of Newtown Township's Paid Fire Services”.

* A resident noted that doubling the pay per call from $5 to $10 would increase the total amount from $12K to $24K, not $28,730. Warren Dallas explained how the latter number was calculated:  In 2020 (and prior years), the Fire Association only paid members for responding to calls if they made 20% or more of the total calls. The $12,000 was actually rounded up. The 2022 plan was based on the total 2020 member responses of 2873 calls, whether the member made one call or more than 20% of the calls. Dropping the 20% minimum is being considered so the additional calls were factored into the cost.

Some numbers from page 14 of the recommended 2022 budget under FIRE PROTECTION:

We do not know if the new retention plan will work, but it is worth a shot. However, we shouldn’t at this time lock the township into a tax increase that potentially will not solve the problem.

For more information about NFA revenues and expenditures for the years 2019 through 2022, see the 2022 NFA General Fund Budget [LINK: https://bit.ly/NFA2022budget]

According to the the June 2021 Monthly Report for the Emergency Services Department (ESD) and the Newtown Fire Association (NFA), there were 111 combined calls for service that month. The breakdown according to the type of call/incident is shown in the following chart:

NOTE: To determine which calls were made by the paid Newtown Twp ESD (NT-ESD) versus those made by the volunteer NFA, you must refer to the June 2021 Monthly Report, which includes the date and time of day of each call. NT-ESD operates 5 days a week from 6 am to 6 pm Monday through Friday. NFA handles calls on weekends and other times during the week.

On April 1, 2021, I attended a Zoom meeting hosted by the Bucks County Consortium. At that meeting Evan Stone, Executive Director of the Bucks County Planning Commission (BCPC), made a presentation titled “The Future of Bucks County Fire Service.” This was actually a summary of the full update report (download the presentation here and the full report here). This post focuses on applying the takeaways from that presentation to Newtown Township.

I recorded a short section from the end of the presentation and the Q&A session in the following podcast:

Newtown is only one of six Bucks County Municipalities that has a paid fire department: the Newtown Emergency Services Department (NESD) of 8 full-time fire fighters (see table below).

All of them operate only Monday through Friday and depend on volunteers to fill the gaps on weekends and after hours on weekdays. In Newtown, we have the volunteer Newtown Fire Association (NFA). As is the case with many, if not all, volunteer fire departments, have a problem answering calls and recruiting/retaining members (read “The Volunteer Newtown Fire Association is at a Turning Point”).

This has led Newtown Township Supervisors to do several things, among them:

How Much Does It Cost to Run a Full-Time Fire Department?

NESD has a staff of 8 full-time firefighters with a 60 hour week. Based on BCPC’s estimate, those firefights should cost the township $117,000 each per year, not including equipment purchases, training, etc. The 2021 budget includes $1,171,225 for NESD salaries, benefits, supplies, and training), which is $146,403 per firefighter!

It should be noted that for an urban “Demand Zone” such as Newtown Township with more than 1,000 resident per square mile, requires a "Minimum Staff to Respond" of 15 firefighters. So, even with a staff of 13 (8 current + 5 new hires with SAFER grant money, if available), Newtown Township would still be short 2 full-time firefighters.

Where Will the Money Come From?

A SAFER grant (see above) is one option, but it should be noted that Newtown Township has already failed in its first attempt to secure that money.

Some money may come from Newtown Borough. At the February 16, 2021, Board of Supervisors Work Session, the supervisors proposed a possible Intermunicipal Cooperation Agreement for fire services whereby the Township would charge Newtown Borough $300,000 per year for providing fire services between 6 AM and 6 PM, Monday through Friday (read the minutes of that meeting). Negotiations are continuing between the Township and Borough.

The only other option is to raise taxes – specifically a special “fire tax.” A fire tax is levied by some municipalities – including Newtown Township, which currently has a 1.00 mill fire tax. By law, a fire tax cannot exceed 3 mills unless a municipal referendum is passed and only up to 1 mill may be used for salary and benefits, according the BCPC.

BTW, Newtown Township can implement a fire tax up to 4.0 mills because a referendum was approved by voters several years ago to allow it.

UPDATE: The Chief also appeared before the Newtown Township Board of Supervisors (BOS) at the October 18, 2021, Newtown Township 2022 Budget Presentation meeting. He answered my question about how the $330,000 donation to the Newtown Fire Association (NFA) in the Township Manager’s recommended 2022 budget will be used. The final approved budget includes about $128,000 to help pay for a new volunteer firefighter retention plan. 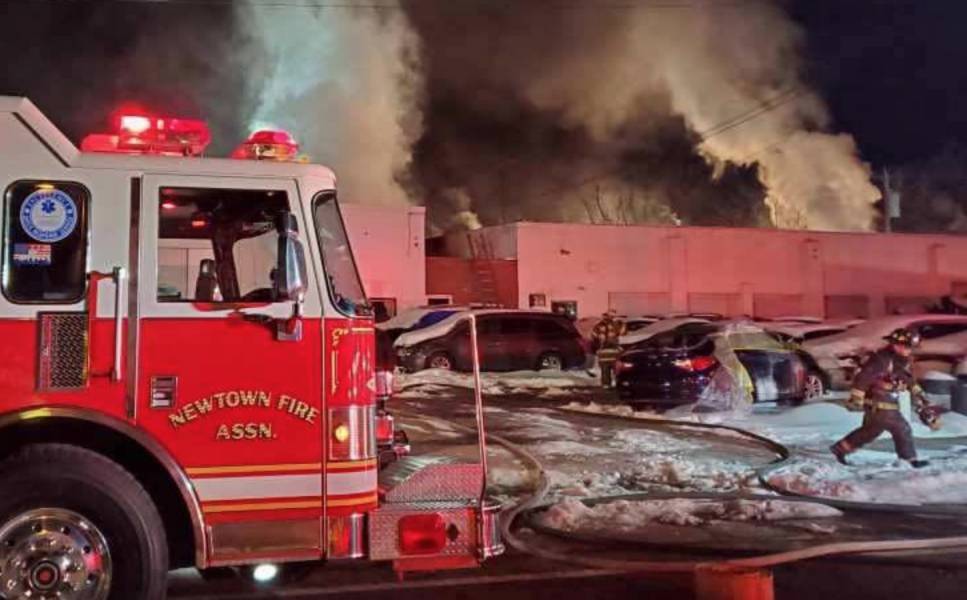 At the Februray 24, 2021, Board of Supervisors (BOS) meeting, Fire Chief Glenn Forstythe presented the January 2021 Newtown Fire & Emergency Services Incident Report, which breaks down incidents by type, by township in which they occurred, and which incidents were handled by the volunteer Newtown Fire Association (NFA) and which by the paid Newtown Emergency Services Department (NESD).

The NFA is on call from 6pm to 6am Monday through Friday and on Weekends; NESD covers the weekdays from 6am to 6pm.

“Good Intent Calls” make up on average about 20-25% of incidents. A good intent is like a false alarm but with reason to think that it was an actual emergency. Here are a few classic examples: (1) You're riding down the highway and come upon a vehicle surround by a huge cloud of smoke. You call the fire department and when they arrive they find out the vehicle isn't actually on fire but has burst a hose or run hot.  (2) Certain weather conditions can also make dryer exhaust looks like smoke and that make for a lot of good intent fire calls. (3) Outdoor grills when first started can also produce enough flame and smoke and sometimes these are reported as fires. 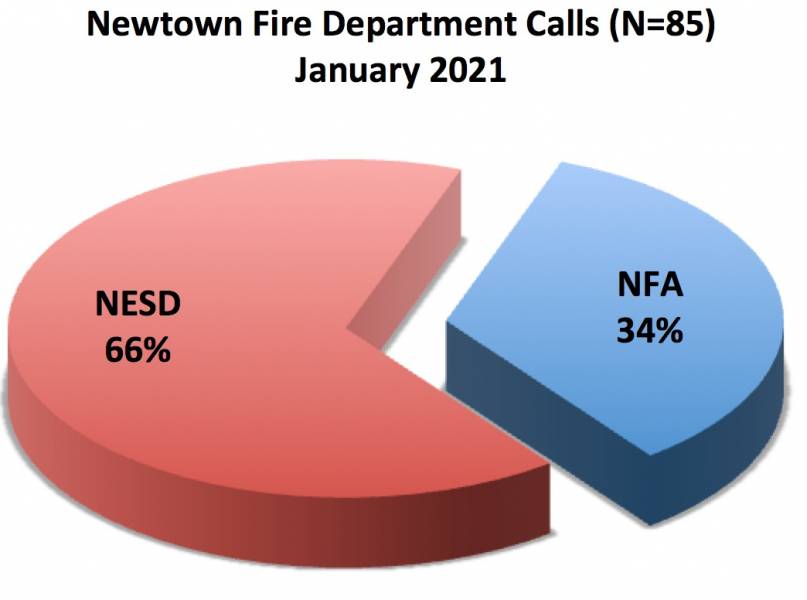 The majority of calls (71%) are within Newtown Township with about 12% in Newtown Boarough. 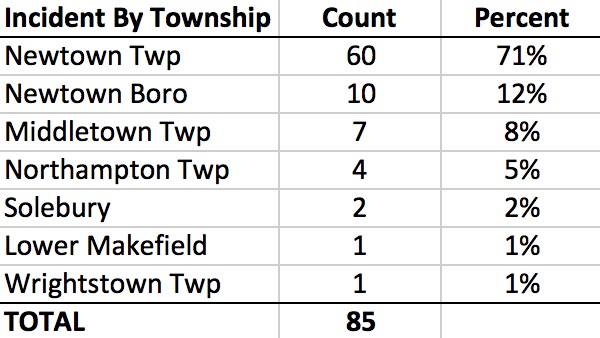