The following is a brief summary of the November 14, 2018, Newtown Board of Supervisors (BOS Definition) meeting based upon the official minutes of that meeting, which you can find here. See how Supervisors voted on motions (click here).

Finance Committee: Mr. Fisher reported on the Newtown Township Finance Committee. The group has been researching a possible grant from the PA Department of Community and Economic Development. There will be a presentation at the Board’s Work Session meeting on Monday, November 19, 2018.

October 2018 Calls report: Interim Police Chief Harris reported on the police activity for October: Calls for service: 1,549 total calls, 328 (21%) of which were in Wrightstown Township - Newtown Police provides services to both Newtown Township and Wrightstown (for details, read "October 2018 Newtown Police Calls Report"). Chief Harris noted Officer Goodwin administered Narcan to save a person in full cardiac arrest from an overdose. Mr. Mack thanked Chief Harris for his recognition of Officer Goodwin and expressed his gratitude to the officers who have saved lives with Narcan. Further discussion was about helping survivors, that they are provided information to overcome their addiction, and they have to take the first step.

Arcadia Green/Newtown Holdings LLC, Tentative Plan Application (Decision): Mr. Schenkman explained that the decision must be drafted, issued and provided to the parties no later than November 25, 2018. The application needs to be approved or denied by the Board for this action to be completed. Mr. Calabro made a motion to approve this application. The motion failed. Mr. Calabro made a motion to deny this application. The motion passed 5-0 for the denial of the Arcadia Green application

"After listening to all the testimony, reading the reports of experts, and listening to residents of surrounding communities, I will vote to deny the current Arcadia PRD Definition because I think it would be unsafe for residents of that development – should it go forward – to exit and enter the development. Also, let’s not forget the additional traffic it would bring to the intersection of Buck Road and the Bypass. Lastly, the plan for a U-turn to allow access to the Bypass is totally impractical, unsafe, and will cause major delays in my opinion, which seems to also be the opinion of PennDOT and other experts." 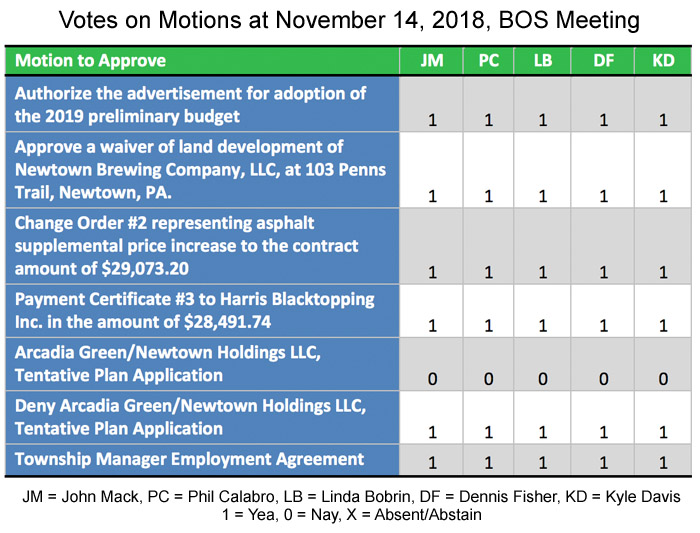