The following is a brief summary of the December 12, 2018, Newtown Board of Supervisors (BOS Definition) meeting based upon the official minutes of that meeting, which you can find here. See how Supervisors voted on motions (click here).

Authorization to File Suit Against Opioid Manufacturers: Mr. Sanders explained a proposed lawsuit which allows suit filed against a number of large manufacturers, distributors and promoters of Opioid Drugs, given current Opioid Epidemic Crisis. This is at no cost to the Township and it is in response to Newtown Township wanting to take a stand in the Opioid Crisis. There was discussion by The Board about the approach of this plan and the overall crisis in general. Mr. Davis said going after manufacturers sends a message that Newtown Township is not a friendly place for your business. Ms. Bobrin said it was appropriate to file this suit so the Township can be reimbursed for any damages suffered. Mr. Fisher said Newtown was on the right side of the issue.

The Supervisors discussed various options for the use of any funds resulting from the lawsuit. Mr. Calabro mentioned the Township obtaining more Narcan and hosting classes to help the epidemic. Mr. Mack expressed the hope that such funds be used to treat people who are addicted.


John D’Aprile of Newtown Grant questioned how much money Newtown would have to pay the attorneys. Mr. Sander responded that Newtown will not pay anything and the lawyers will take a percentage of the award, if any. Mr. Sander said that a reasonable percentage will be negotiated when the Township gets the engagement letter from the attorneys.

This survey asks your opinion of this lawsuit. No identifying information is collected via this survey unless you opt-in to provide such information for purposes of follow-up by subscribing to John Mack's email newsletter.

DISCLAIMER: This is not an official Newtown Township approved survey. Its purpose is solely to inform John Mack – a Newtown Supervisor – of the public’s opinion regarding this issue.

2019 Final Budget: Mr. Fisher commented on economic development. There was discussion on whether or not there is flexibility in the budget to add a line item for the DCED Definition Match. Mr. Sanders stated projected funds could allow for the DCED grant.

Motion was made by Ms. Bobrin to approve the final budget Resolution. Motion was seconded by Mr. Fisher. Motion passed 5‐0. 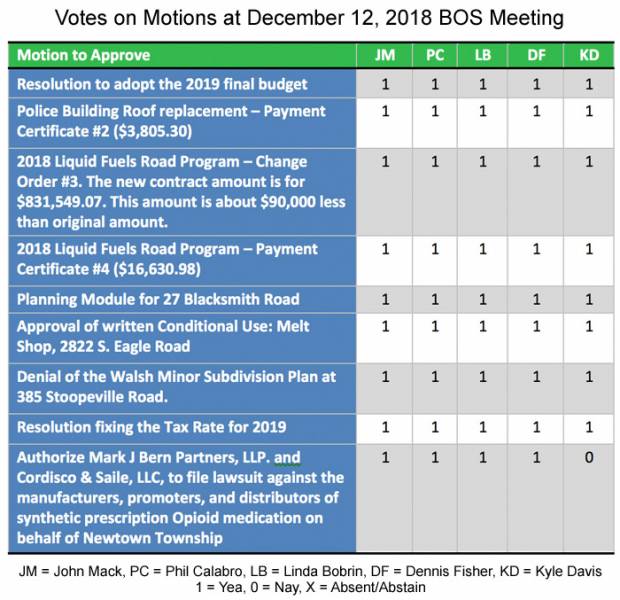