The following is a brief summary of the March 27, 2019, 2019, Newtown Board of Supervisors (BOS Definition) meeting based upon the official minutes of that meeting, which you can find here. In attendance and voting were Supervisors: Chairman Phillip Calabro, Vice Chairman Linda Bobrin, Secretary John Mack and members Kyle Davis and Dennis Fisher. Also in attendance were: Township Manager Micah Lewis, Township Engineer Leanna Colubriale and Township Solicitor David Sander.

Chipotle Mexican Grill, 2930 South Eagle Road: Mr. Sander noted one scenario has changed since conditional use was granted at last meeting (read "Summary of March 13, 2019, BOS Public Meeting"). The original unit number was Unit 40 at the end of Building 8; this was an error on their part which they have corrected to reflect Unit 37, located in the middle of building 8. It is similarly situated and there is no substantive adverse impact on granting conditional use and approval is recommended. The motion passed 5-0.

Mr. Brod inquired if the RFI would be the next step to get to the stage to issue RFP's. Mr. Calabro raised concerns about issuing the RFI without knowing the scope of work and issuing RFP's without advertising them.

Mr. Mack stressed that he would like to be more involved with the process including formulating questions for consultants and the grants in general. He wants to be sure that he and the supervisors have an opportunity to look over and edit all documents that carry their signatures. Mr. Brod said this is why the committee is not issuing anything directly.

Bid Recommendation for the 2019 Liquid Fuels Road Program: The Board discussed a motion to award to Harris Blacktopping, Inc., The Base Bid, Alternate Bid No. 2 and Alternate No. 3 in the amount of $706,596.20 for 2.73 miles of roadway. Mr. Mack asked about alternate roads included and Ms. Colubriale said the two alternates awarded were Terry Drive and Blacksmith Road.

Mr. Mack also read we were awarded $611K in Liquid Fuels Program Definition funding when we expected $640K [read "Newtown Township Will Receive $611K In State Liquid Fuels Payments"]. Mr. Lewis clarified that $640K was budgeted under the liquid fuels fund and the township received $611K from the state and anticipated $595K. The motion passed 5-0.] 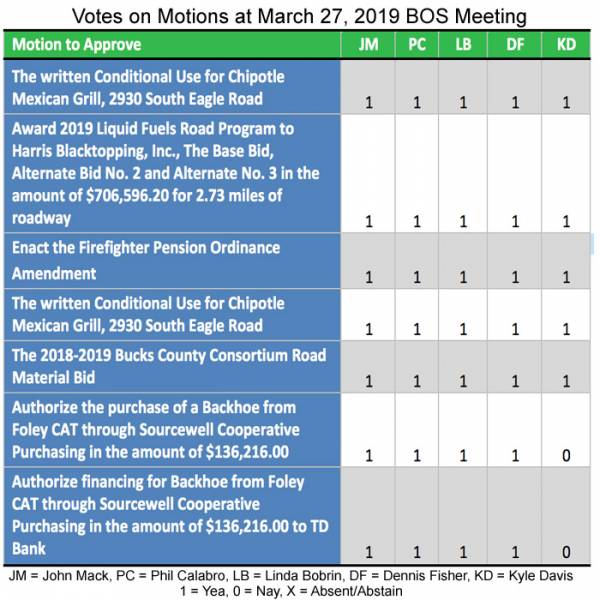 Newtown Fire Association General Meeting: Dennis Fisher and I attended the Newtown Fire Association (NFA) General Meeting last night. Matt Gerhard, Chief of the NFA, communicated to me that he would like to attend the April 10th Board of Supervisors meeting, if possible, to answer any questions about the NFA’s formal response to Dr. Carter’s recommendations and the progress we have made so far. He plans on providing a copy of said responses to the BOS the week prior for review. If it is appropriate, he is available to meet beforehand with the NFA BOS liaison, Mr. Lewis and Chief Forsyth to briefly go through their response.

After the meeting, Dennis and I met Lieutenant Liz Ellis who gave us a personal tour of the NFA museum. She explained to us how firefighters find the location of alarms and especially how hydrants are located and the technology available to ensure that there is adequate water pressure at fire locations.

Technology Committee: Four members of the Technology Committee met last night. On the agenda was re-organization and a Webex demonstration of SAVVY CITIZEN, which is a calendar and mass notification system that enables local governments to relay important information to their citizens. The Committee did not elect a Chair at this meeting, but preferred to wait until additional members could be present. At this time there is one vacancy to be filled on the Committee – if interested, please contact the Township – and one member who seems to be inactive and unreachable.

The Savvy Citizen app, which anyone can download to his or her phone for free, is competitive with NIXLE, which was discussed at a previous BOS meeting, but the subscription fee is considerably less – about $2500 per year vs. $6000 for NIXLE. The Committee expressed interest in this app and may wish to make a presentation at a further BOS meeting.