The following is a brief summary of the April 24, 2019, 2019, Newtown Board of Supervisors (BOS Definition) meeting based upon the official minutes of that meeting, which you can find here. In attendance and voting were Supervisors: Chairman Phillip Calabro, Vice Chairman Linda Bobrin, Secretary John Mack and members Kyle Davis and Dennis Fisher. Also in attendance were: Township Manager Micah Lewis, Township Engineer Leanna Colubriale and Township Solicitor David Sander.

The second was for Madison Family Dental LLC, 258 N. Sycamore Street, in Goodnoe’s Corner. The applicant will occupy 800 sq.ft. for specialized dental care services. The Commission recommended not to oppose this application.

Mr. Mack asked if the proposed meadow area in Roberts Ridge park is where soccer is currently played. Mr. Lewis said there is a drainage swale there, but no soccer fields. The discussion continued on soccer field locations, and the proper process of creating meadows Mr. Mack also questioned how grassy areas in parks would be converted to meadows and he mentioned that according to his understanding chemicals like Roundup have to be used to first kill the grass. Mr. Mack asked if there were environmentally friendly ways other than using Roundup to do this. Mr. Lewis noted that there are other products approved by the DEP and EPA for use in wetland areas.

Drinking Water Contamination: Resident Mark Boada expressed his concern over a letter received from Newtown Artesian Water indicating small levels of contamination in groundwater. Mr. Mack addressed this by acknowledging the Board is aware of this situation and the Board is being kept informed of ongoing testing results by Mr. Angove from Newtown Artesian Water. [Followup: "Update on PFAS in Newtown's Water Supply".]

DCED Grant: Mr. Calabro reported the township has been approved for a $40K grant which will be put toward economic development (read "Newtown Township Seeks Grant to Assess Finances"). Mr. Calabro credited the Finance Committee and Mr. Fisher who made the proposal to the Board and Mr. Lewis for completing the grant application. Mr. Calabro said this grant will afford the township the ability to establish a 5-10 year plan which will permit the township to continue to be a healthy and thriving community.

South Eagle Road Potholes: Mr. Mack raised a question about the party responsible for pothole repair on South Eagle Road between the farmers market and Wendy’s since this is not a township owned road. Mr. Lewis said the landlord is responsible as they own the roads and Mr. Sander confirmed. [This was discussed on the Roberts Ridge section of Nextdoor here.]

A discussion ensued around enforcement of ordinances, suggestions on how to manage these types of situations and the ramifications of township involvement. Ms. Bobrin noted that conditions were placed on landowners for other projects and suggested that the Township consider that maintenance of roads up to Township standards should also be a condition that could be imposed by the Township. Mr. Sander said he would look into the Ordinances and see what can be done.

"A Newtown Township resident notified me of several potholes on South Eagle Road between the Farmers Market and Wendy's. I've seen these myself on the way to do some shopping in the area - see photos attached. As this is private property that your company managers - and not Newtown Twp - I thought you would like to see this.

"I note that this road is used by Newtown Ambulance Service as well as residents and for that reason repairing these should be a priority. Thank you for your attention to this matter." 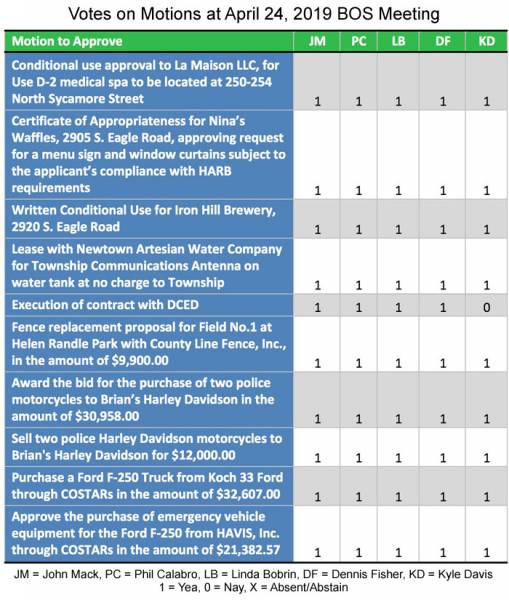