The following is a brief summary of the May 8, 2019, 2019, Newtown Board of Supervisors (BOS Definition) meeting based upon the official minutes of that meeting, which you can find here. In attendance and voting were Supervisors: Chairman Phillip Calabro, Vice Chairman Linda Bobrin, Secretary John Mack and members Kyle Davis and Dennis Fisher. Also in attendance were: Township Manager Micah Lewis, Township Engineer Leanna Colubriale and Township Solicitor David Sander.

Pollution Reduction Plan: Mr. Lewis said that the plan is on the Township’s Web site, outlining measures to reduce sediment. A number of residents have e-mailed comments, which will be reviewed by the Township Engineer before being forwarded to the DEP. [This was discussed on the Roberts Ridge section of Nextdoor here.]

[Several residents and watershed experts spoke out against the establishment of a "meadow" in Roberts Ridge Park as part of the township's Pollution Reduction Plan. Several objections were raised. The discussion resulted in the Township rethinking the plan for the park and mowing the meadow in the meantime. Other ideas were put forward to comply with PA Department of Environmental Protection regarding reduction of pollution of watersheds.]

Newtown Artesian Water Company Presentation: Dan Angove, General Manager of Newtown Artesian, followed up with the Board on Newtown Artesian’s February letter advising residents of the presence of Polyflouroalkyls Definition (PFC’s) in our water. While Newtown’s water tested below the advisory of 70 particles per trillion, there were PFC’s detected. The Water Company has initiated quarterly testing and has taken two wells off line to address the issue. www.newtownwater.com has the most recently updated information on the levels. [This was discussed on the Roberts Ridge section of Nextdoor here.]

[At the meeting, Supervisor Mack asked Mr. Angove to explain the results in comparison to the Q4 results focusing on (1) how sampling is done, (2) when was sampling done, (3) were multiple samples collected & combined for the test? (4) what company did the testing, (5) how accurate is the test? What's the margin of error? Residents also asked if the NAWC had set aside money to lower the levels of PFAS if necessary to comply with the Maximum Contamination Levels (MCLs) set by the PA Department of Environmental Protection.] 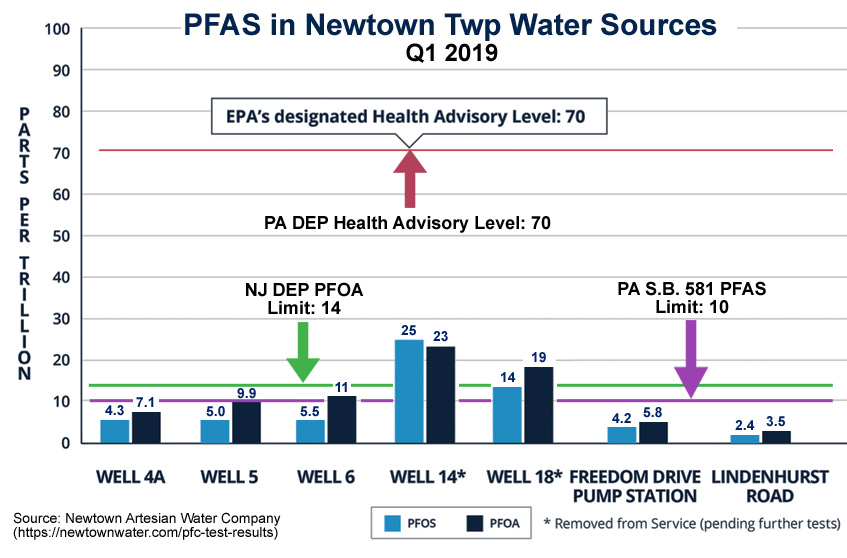 Police Report: Police Chief John Hearn presented the Calls Report for April 2019. In April, the Newtown Police Department responded to 1,686 total calls, 300 (18%) of which were in Wrightstown Township. Mr. Mack asked about recent anti-Semitic graffiti in Tyler Park. Chief Hearn said that this incident was in the Northampton portion of the park and is being investigated by the State Police. Newtown has 13 places of worship; the Department has a presence at all major holiday worship services but otherwise does circulate among these churches and synagogues. He has reviewed the files and found no incidents of hate crimes in our township in the last three years. See more details here. 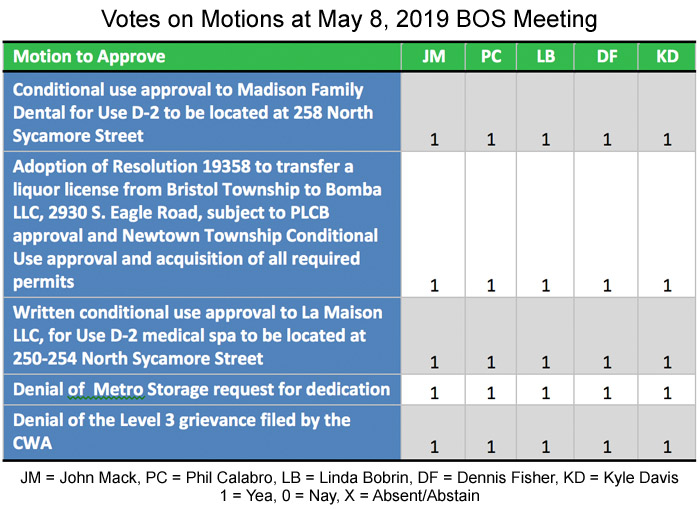