The following is a brief summary of the July 10, 2019, 2019, Newtown Township Board of Supervisors (BOS Definition) meeting based upon the official APPROVED minutes of that meeting, which you can find here. In attendance and voting were Supervisors: Chairman Phillip Calabro, Vice Chairman Linda Bobrin, Secretary John Mack and member Kyle Davis. Also in attendance were: Township Manager Micah Lewis, Township Engineer Leanna Colubriale and Township Solicitor David Sander. Supervisor Dennis Fisher was absent.

Savvy Citizen: In relation to the 2020 budget, Mr. Mack proposed the Township consider the Savvy Citizen app [a text/social media based resident notification system recommended by the Newtown Technology Committee] to provide information to residents at a cost of $300 per month. After some conversation it was determined a Savvy Citizen representative could be invited to attend a future work session to review details.

HOA Meetings: Mr. Calabro suggested the Administration contact HOA’s to schedule meetings to discuss community issues and concerns. He also said it would be a good time to obtain their input for the Comprehensive Plan Definition. Mr. Mack added that the Pollution Reduction Plan could also be addressed. It was agreed to revisit this issue going forward. [read "Newtown Revises Pollution Reduction Plan After Hearing Resident Comments"]

Conditional Use Definition – The Smile Company: Attorney Joseph Blackburn represented the applicant and presented the application for use D-2 medical office, abutting Harvest in the Village at Newtown Shopping Center. The space is 2,018 square feet and will house an orthodontics office in an existing building. The motion to approve passed 4-0.

Liquor License Transfer – Iron Hill Brewery: Application of Iron Hill Brewery, LLC for intermunicipal transfer of liquor license was presented by Joseph Blackburn who represented the applicant. The license was acquired from the PLCB auction from within the county.The motion to approve passed 4-0.

[More details provided by John Mack, not in minutes: In the Preliminary Construction Drawings (Exhibit 3), I see “Rain Gardens” as for example on page 18, which shows the trail at Lower Dolington Road and Frost Lane. Q: How far south from Frost Lane is it proposed to build these gardens along Lower Dolington? Q: I was wondering if this would impact access to Roberts Ridge Park from Lower Dolington Road? Many residents park their cars along Lower Dolington for easy access to the children’s playground and open space in the park. I’ve often thought that it would be a good idea to provide steps up the steep hill to make it easier for children and grandparents to get up the hill and walk to the playground I am all for “Rain Gardens,” but from the drawings it appears that they would prevent people from parking there.]

Mr. Lewis explained they would stop near playground area and said the specifics will be finalized in the design phase.

Comprehensive Plan Definition: discussed the Jointure’s Definition Comprehensive Plan which is up for review and modification every ten years. According to the written statement by Mr. Fidler, “the Commission members discussed the Jointure’s Comprehensive Plan... Sharing information with residents and Township committees before the Plan is due would enable productive planning. Using electronic and paper sources for information and feedback would provide a good cross section of residents. All responses would need to be verified that they are actually received from Newtown Township residents.”

In response to Mr. Mack’s questions on the Comprehensive Plan [More details provided by John Mack, not in minutes: "Is the PC recommending that the Township hold public meetings and survey residents as part of the process should it be decided to go ahead with updating the Comp Plan? Any specific suggestions for verifying responses are from actual residents?"], Mr. Fidler explained that the Joint Zoning Council Definition discussed getting input from residents and businesses by asking pertinent questions regarding their visions on improving the quality of life in the Jointure. Mr. Calabro stated the Board just received notification of the Comprehensive Plan and asked when the Board was expected to complete the process for the Plan. Mr. Fidler said the Planning Commission expects the process to last about one year. Mr. Calabro asked if there was any procedure for the Board at this time. Mr. Lewis said the Plan must be included the budget; it is not in the 2019 budget as it was not a proposal, however it will be included in the 2020 budget. The Bucks County Planning Commission (BCPC) is asking the Board to pass a resolution in support of a formulation of the Comprehensive Plan. Ms. Bobrin asked who does the application for the grants and Mr. Lewis replied that it is the BCPC. He said the Township will ask the BCPC to come to future Planning Commission and Board meetings to review details. There was additional discussion on cost and payment, surveys, responsibilities and the aggressive timeline.

It was agreed that sharing information with residents and township committees before the Plan is due would enable productive planning.

June 2019 Police Report: Chief Hearn reported there were 1,603 calls for service during June. There was one death investigation, two non-fatal overdoses and four arrests. Two arrests were for DUI, one for bank fraud and the other domestic assault. [Read "June 2019 Newtown Township Police Report: Traffic Citations Drop, But Don’t Get Complacent!" for more details.]

Chief Hearn then informed all that in addition to Facebook and Twitter, the Police Department is now participating in the Next Door app which gives residents another social media outlet to obtain information from the Department. Mr. Mack said he was pleased to see the PD posting on Next Door since many residents use the app.

June 2019 Emergency Services Report: Chief Forsyth reported the Fire Department had 117 calls for service during May. The department conducted 40 fire safety inspections in the township as well as a successful fire drill at the high school while students were still in attendance. Mr. Mack thanked the Chief for the expanded report and asked about the fires in May. Chief Forsyth explained the details. 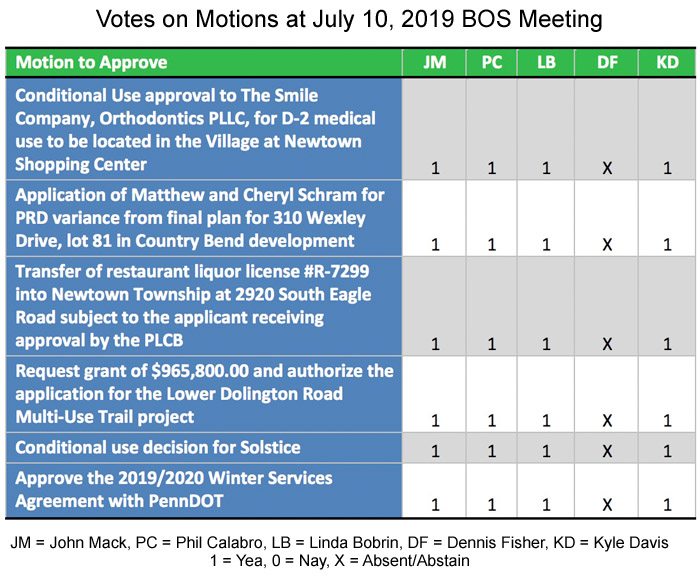