The following is a brief summary of the August 14, 2019, 2019, Newtown Township Board of Supervisors (BOS Definition) meeting based upon the official minutes of that meeting, which you can find here. In attendance and voting were Supervisors: Chairman Phillip Calabro, Vice Chairman Linda Bobrin, Secretary John Mack and members Kyle Davis and Dennis Fisher. Also in attendance were: Township Manager Micah Lewis, Township Engineer Leanna Colubriale and Township Solicitor David Sander.

At the Last Board meeting it was proposed that a Savvy Citizen representative be invited to attend a future work session. Recall that Savvy Citizen offers a mobile phone based notification system that can inform citizens of meetings, public service notices, Parks and Rec programs, road closures, emergencies, etc. Soon after that meeting, I notified Mr. Lewis that Jeralyn Brown, senior account manager at MSA, the company that is responsible for Savvy Citizen, confirmed that she can attend the Sept 16 Work Session and answer questions.

Villas of Newtown: Resident and president of the Villas of Newtown (VON) HOA, William Posner, addressed the Board on behalf of the VON community. He expressed concern that the motion to draw down financial security being held by the Township for completion of community improvements was removed from the agenda. Mr. Posner said he sent a position paper to the Township and received a response that work on site had commenced and therefore the item was removed until further details could be obtained. Mr. Posner then reviewed the recent history of the situation including interactions with the builder and relayed his concern that the work will not get done. He submitted signatures of approximately 90 residents supporting moving forward and asking for assistance to bring this matter to conclusion.

Mr. Davis acknowledged the issues VON residents have had and assured that the BOS will follow through according to the guidelines. Mr. Calabro added that the BOS wants to see this completed and pressure on the builder will continue and if necessary legal action will be taken in the proper stages.

Native Plant Resolution: George Skladany from the Environmental Advisory Council (EAC) presented a resolution to support the increased use of native plants in the Township in order to benefit the community as a whole and improve the quality of life. He thanked the BOS for their support of EAC activities including this one and the pop-up garden in conjunction with the Audubon Society.

Mr. Mack questioned where residents might obtain a definition and list of acceptable native plants. Mr. Skladnay explained there were many lists and definitions as well as differing opinions on this topic and advised having some leeway could be beneficial. Mr. Mack agreed to accept the ambiguity and move forward. Mr. Fisher added that the EAC was discussing updating the SALDO and after some conversation around this subject it was determined the EAC will continue to work on providing a list of acceptable native plants.

At the native plant/rain garden exhibit in front of the Newtown Theater. Great day for a walk in town and outdoor dinner tonight on State Street!

Approve and Advertise RFP for 5-Year Financial Plan: Mr. Mack stated since the Plan was written the EIP has changed its name and he is requesting the new name be updated in the Plan. Mr. Sander agreed to replace all appearances of EIP with STMP. Mr. Mack then read excerpt on page 4, paragraph G relating to discrimination and said the Township has a new anti-discrimination ordinance which expands the definition* and he suggested the language that goes out to vendors and consultants should reflect our anti-discrimination ordinance.

New Anti-Discrimination Language To Be Included in All RFPs

“The consultant will not discriminate against any employee or applicant for employment because of actual or perceived race, color, gender, religion, ancestry, genetic information, national origin, sexual orientation, gender identity, gender expression, familial status, marital status, age, mental or physical disability, or use of guide or support animals and/or mechanical aids.”

Mr. Sander agreed and said he will work with Mr. Lewis to update all appearances to include the new anti-discrimination ordinance language.

June & July 2019 EMS Report: Chief Forsyth reported the Fire Department had 113 calls for service during June and 130 in July. During June 82 fire safety inspections were conducted in the Township and there were 31 in July.

Mr. Fisher ... requested Chief Forsyth review gas grill location requirements. The Chief advised never put or use a gas grill on a second-floor balcony. He reminded all the code requirement is gas grills be at least 10 feet away from the home.

Mr. Mack inquired if the safety inspections were both residential and business and Chief Forsyth said inspections are for commercial buildings only. 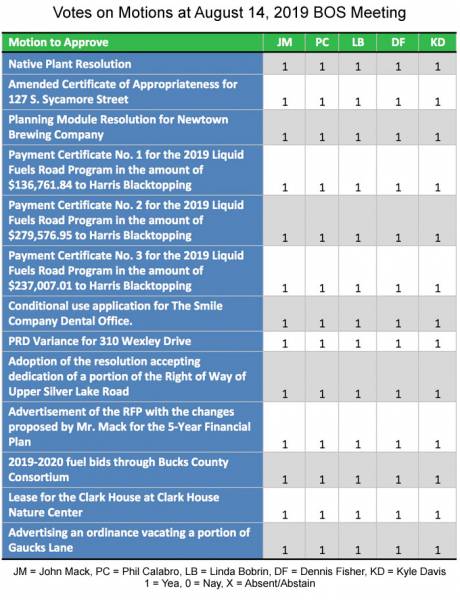