The following is a brief summary of the September 11, 2019, 2019, Newtown Township Board of Supervisors (BOS Definition) meeting based upon the official minutes of that meeting, which you can find here. In attendance and voting were Supervisors: Chairman Phillip Calabro, Vice Chairman Linda Bobrin, Secretary John Mack and members Kyle Davis and Dennis Fisher. Also in attendance were: Township Manager Micah Lewis, Township Engineer Leanna Colubriale and Township Solicitor David Sander.

Villas of Newtown – Motion to Draw Down Financial Security: Bill Posner, President of the Villas of Newtown (VON) HOA thanked Mr. Mack for reaching out and meeting with VON board members and touring the areas of concern. Since Mr. Mack encouraged the VON board to try to come to an agreement with the builder, they met with John McGrath and Dennis Work from the Township engineer’s office to go over punch list items. Some items can be completed in short order, but the detention basin continues to be the main area of concern. Mr. McGrath indicated he could have the punch list finished by November 26. The VON board is skeptical due to many previous broken deadlines however they decided it would be alright to delay until first board meeting after November 26 to give Mr. McGrath yet another chance to complete the work. In the event the work was not done by that time, Mr. McGrath has agreed to waive any right to that money. Mr. Posner also suggested another option would be for the BOS to pass the motion and consider giving Mr. McGrath the opportunity to get the work done. Mr. Mack suggested we hear from Mr. McGrath.

Mr. Calabro asked where the residents stood on this issue and several came forth to provide feedback. The feedback was mixed with some residents happy with basin as is and the work that has been done and others in disagreement wanting the basin repaired along with final completion of the punch list. Conversation ensued on how the basin should operate, the As-Built plans and whether or not Mr. McGrath will complete work by November 26. The consensus was due to Mr. McGrath’s history of noncompliance over the years most do not feel confident he will live up to his word this time.

Friends of Roberts Ridge Park Presentation: Resident Elen Snyder, founder of Friends of Roberts Ridge Park stated she formed the group in response to the meadow plan put out by the Township. Ms. Snyder stated the community had concerns with losing shaded areas of the park with the introduction of the meadow plan. In order to regain shade in the park, the community has come together with a plan to add trees back into the park via donations. Over 100 families joined the group and the proposal is to plant 32 trees. Joyce Ely of the Neshaminy Watershed Association has partnered with the group and explained the environmental benefits the native trees will provide. Mr. Fisher asked if donations were still being accepted and Ms. Snyder said they will be accepting them for next year and information can be found at Friends of Roberts Ridge Park on Facebook.

[More details provided by John Mack, not in minutes: "I am very pleased that residents and local area environmentalists are supporting this plan. Not only does it provide a much-needed boost to the Township’s Pollution Reduction Plan, it also enhances the open space of the park for recreational activities such as flag football organized by residents and children's “Super Soccer Stars” classes organized by the Township’s Parks and Recreation Department. It's a win-win for the Township, proving that there is such a thing as ROE – Return on Environment."]

August 2019 Police Report: Chief Hearn reported the department responded to 1,617 calls for service, 60 traffic accidents, made 8 arrests and issued 190 traffic citations. There was one incident of an officer administering Narcan successfully and one suspected death related to narcotics. Focus continues on truck enforcement and aggressive driving throughout the township. Two officers received a letter of commendation for outstanding police work while off duty. [Read "August 2019 Newtown Township Police Report: Traffic Citations Down, One Life Saved By Narcan" for more details.]

Newtown Fire Association Meeting: [Report by John Mack, not included in minutes.] On August 26, 2019, I attended the Newtown Fire Association monthly meeting. Dennis Fisher was also there. There was ongoing discussion regarding activities of the Apparatus Investigating Committee to develop goals and timelines. The next meeting of that committee is on Sept 23, 2019.

The NFA is also applying for a $200,000 federal Assistance to Firefighters Grant. This funding is for critically needed resources to equip and train emergency personnel to recognized standards, enhance operations efficiencies, foster interoperability, and support community resilience. They are getting professional help to apply for the grant.

The NFA is looking into doing more on social media. There will be a social media tent at the beerfest and the Association is thinking of following the lead of the Newtown Police Department in opening a Nextdoor account to reach out to residents.

Bucks County Commissioners Meeting: [Report by John Mack, not included in minutes.] LED Street Light Fund: On September 4, 2019, I attended the Bucks County Commissioners meeting, which was held at the Washington Crossing Historic Park Visitor Center. At that meeting, the Commissioners passed Ordinance 160, which authorizes the issuance of a “Participant Note” in the amount of $396,000 to fund the conversion of municipal street lighting to energy and cost saving LED lights. I was told that municipalities could borrow from this fund at a rate much lower than a rate offered by banks.

Newtown Township maintains 1,674 street lights. The Township spends considerable money repairing those lights, which frequently burn out, and paying for electricity to keep them lit.

Looking over the Bills Lists for 2019, I find that the Township has so far this year spent over $70,000 repairing these lights – ie, replacing the bulbs, etc. – and nearly $90,000 to PECO for electricity costs.

Both these costs would be significantly reduced if we replaced our street lights with an LED system- something that Newtown Borough has already done several years ago. Converting to LED street lights could cut energy costs significantly and also the costs of repairs.

Replacing street lights with LED lights can be costly. But the cost will be recouped in as little as 6 years. I hope that Newtown someday in the not too distant future can afford to borrow the necessary funds to make this technology upgrade and save money in the long run.

I notice that there is only $59 in the Street Light Fund according to the 2019 budget.

At some point, Newtown Township has to enter the 21st Century. This is just one example of that need. 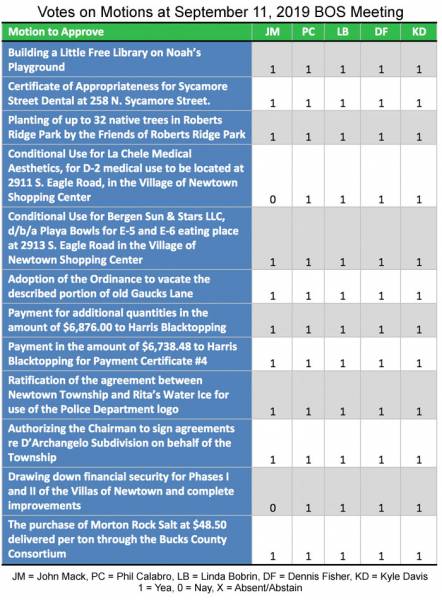