The following is a brief summary of the October 10, 2019, Newtown Township Board of Supervisors (BOS Definition) meeting based upon the official minutes of that meeting, which you can find here. In attendance and voting were Supervisors: Chairman Phillip Calabro, Vice Chairman Linda Bobrin, Secretary John Mack, member Kyle Davis and member Dennis Fisher. Also in attendance were: Township Manager Micah Lewis, Township Engineer Leanna Colubriale and Township Solicitor David Sander.

2018 Audit Presentation: Ed Furman of Maillie, LLP, the Township’s independent auditor, presented an overall summary of the final 2018 audit [read "2018 Audit Presentation"]. He stated they issued a clean, unmodified audit report on financial statements along with a Statement of Auditing Standards 114 Report to the Board which reflected nothing negative. Mr. Furman reviewed the audit testing process and methods used to conduct the audit as well as the findings related to payroll, retiree medical coverage and pensions. He discussed revenue and expenses, taxes and government funds. He closed by saying the Township finished 2018 above recommended numbers with the fund balance being 22% of general fund revenue. In response to Mr. Mack’s questions on the earned income tax EIT Definition), Mr. Lewis explained the residential EIT increased.

Mr. Calabro asked about the overall status of the Township and Mr. Furman explained that bond rating agencies generally focus on the general fund and look for 8 to 12% revenue. Therefore, Newtown Township is well above average at 22%.

[Afterward, Township Manager Micah Lewis offered this clarification to Supervisors via email: "I wanted to take a minute to clarify the confusion surrounding the Residential EIT statement in the 2018 Audit. The statement in the management discussion portion of the audit that 'EIT continues to rise' refers to the general trend in Resident/Non-Resident EIT collection. It is true that Resident EIT decreased last year, however the trend is still increasing 4 out of the 5 previous years. I will work to clarify this statement in next year's Audit. Also - the figure in that portion of the Management Discussion represents the Resident EIT figures from 2018. I believe we will continue to see a rise in Resident and Non-Resident EIT as the Village at Newtown comes online with the new facilities. This is also an example of how 'volatile' the source of revenue is. One year the figures can increase drastically, and the next they can fall." Below are the numbers and charts regarding EIT and Total Tax Revenue trends.] 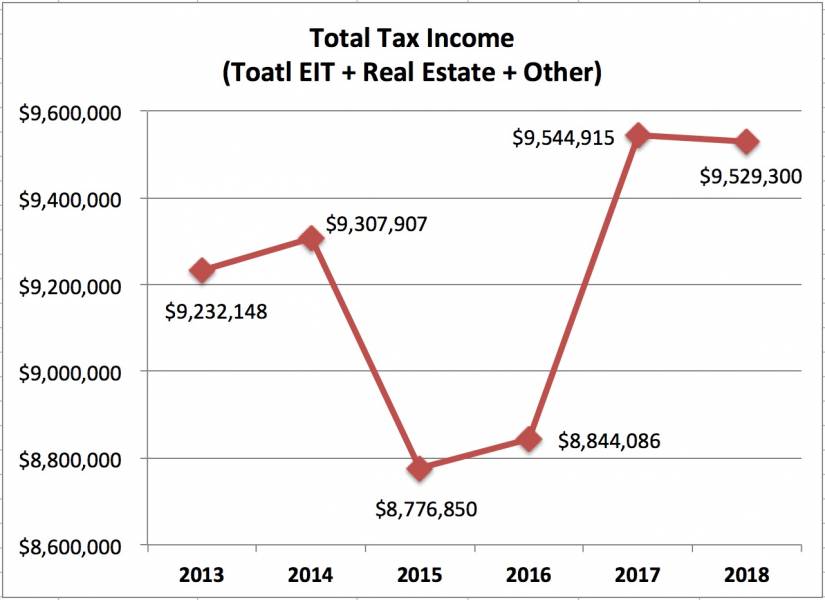 September 2019 Police Report: Chief Hearn reported for the month of September the Police Department responded to 1,794 calls for service. Among them were 55 traffic citations, nine arrests, four DUI’s, two narcotics related and one burglary. The Chief said there was a police officer on location for every school opening and there was a successful enhanced lockdown drill held on October 8. [For details, see "September 2019 Newtown Township Police Report: Speeding Citations Drop".]

Veterans Committee: Chuck Resch, member and chaplain of Newtown American Legion Post 440 reported that their general meeting is held the third Tuesday of every month and they are always looking for new members. He reminded all that the well-maintained Post building caters many events and is available for rental to the public. Mr. Resch reviewed upcoming activities and events which can also be found on their website. He shared that the Post provides an Honor Guard every Friday for Washington Crossing National Cemetery, members also volunteer at the Cemetery administrative building and they participate in unattended burials.