The following is a brief summary of the October 23, 2019, Newtown Township Board of Supervisors (BOS Definition) meeting based upon the official minutes of that meeting, which you can find here. In attendance and voting were Supervisors: Chairman Phillip Calabro, Vice Chairman Linda Bobrin, Secretary John Mack, member Kyle Davis and member Dennis Fisher. Also in attendance were: Township Manager Micah Lewis, Township Engineer Leanna Colubriale and Township Solicitor David Sander.

Joint Comprehensive Plan Proposal: Lisa Wolff and Jeremy Stoff of the Bucks County Planning Commission (BCPC) reviewed the Joint Comprehensive Plan (JCP) Proposal. Mr. Stoff began stating in February 2019, the Newtown Area Joint Zoning Council (JZC Definition) raised the issue of updating the JCP and asked the BCPC to provide a cost estimate for the update. It is recommended under the Pennsylvania Municipalities Planning Code (MPC) the Plan be reviewed every 10 years and the last JCP was adopted in 2009. Mr. Stoff said the JCP is one of the most important tools used by municipalities for land use planning and local governance; it also states future goals and provides a formal vision for the Planning Commission, elected officials, residents and organizations. The MPC recommends including plans for land use, present and future housing needs, transportation plans, community facilities plan, and plans to preserve natural and historic resources as well as how the plans will be implemented. Mr. Stoff concluded by saying the JCP also provides the framework for zoning, subdivision, infrastructure, capital budgeting and decision making.

Ms. Wolff proceeded to discuss funding of the JCP stating the primary funding would be via the Municipal Assistance Program (MAP Definition) administered by the State Department of Community and Economic Development. She explained this grant has a rolling deadline and it would fund up to 50% of the project. Ms. Wolff added working jointly with Upper Makefield and Wrightstown is beneficial, however the outcome of being awarded the grant is still unknown.

In response to Mr. Mack’s questions regarding cost, Ms. Wolff confirmed the cost at $50,880 and said Newtown Township is responsible for 47.59% based on allocations using total population, land area and taxable assessment. Mr. Mack also inquired about the probability on obtaining the grant to which Ms. Wolff was unable to answer due to unknown factors such as how many other applications will be received throughout the state. However, she did say that the State looks favorably on municipalities working jointly. Mr. Mack asked if the BCPC assists in the application of the grant and if the cost is part of the grant. Ms. Wolff said the BCPC will process the grant at no cost to the Township.

Resident Michael Horbal expressed his support of a comprehensive plan and made suggestions to the BOS including considering the level of participation of Newtown Township in the JMZO with focus on promoting smart growth and having Upper Makefield and Wrightstown share more responsibility in future development.

[For details, see a video of the presentation: "Supervisors Approve Proposal for Revising Comprehensive Plan".]

Conditional Use ‐ Thrive, An Acton Academy Inc.: Attorney Richard Martin represented the applicant and Anna Steinberg of Thrive was sworn in. Mr. Martin presented the application for use C‐2 school use at 116 Pheasant Run within the existing facility of the Newtown Athletic Club Baseball Academy building in the Light Industrial district. Ms. Bobrin moved to grant approval. The motion passed 5-0.

Village of Newtown Shopping Center: Based on concerns from residents regarding issues at the Village of Newtown Shopping Center, Mr. Mack reached out to a Brixmor representative to see if they would come before the Board to provide details on the progress of the shopping center. Brixmor said they would, however, would prefer to wait until near the end of the project. Mr. Calabro asked what Mr. Mack would want to hear from them and suggested we wait until they are ready to come in. Mr. Mack is hoping they will discuss minor traffic improvements and mentioned the agreements with Brixmor include a post traffic study where Brixmor agrees to take BOS suggestions into consideration. Mr. Lewis confirmed they will be doing a post development traffic study. Mr. Lewis will contact Brixmor and determine when they will be available to come before the BOS.

Newtown Creek Bridge Proposal ‐ Discussion: Mr. Davis reviewed the proposal and thinks it is a great idea for both the Borough and the Township. Ms. Bobrin agreed stating it was a very impressive undertaking. Mr. Mack received comments both for and against and brought up cost concerns with the Township expected to pay for most of the project. Mr. Fisher is very interested in the concept and would like to go forward with it. He mentioned taking advantage of the Newtown Creek Coalition’s nonprofit status to get in kind support and Mr. Calabro agreed that many entities could be interested in supporting this. Mr. Calabro also said there should be a formal presentation to the public and the next step would be to have the NCC come back and give a presentation. Mr. Davis added that he too has concerns over the cost, however reminded all that this is still in the idea stage and there is no commitment other than to move forward and see if this is a viable plan. The discussion continued on the resolution and Mr. Calabro polled the Board for interest in moving forward. The consensus was to move forward and ask Mr. Sellers from the NCC to return and give a presentation at an open meeting and proceed from there.

[From my notes for the meeting:

I have received over 30 comments – both for and against this bridge – from residents in both Newtown Township and Newtown Borough. Just to mention a few:

Some residents liked the idea but wanted a sidewalk along Frost Lane from Goodnoe Elementary – where the Newtown Trail ends – to the proposed bridge.

Some noted that the bridge would benefit businesses along N. Sycamore Street as well as residents. Comment: “Auto traffic in town has increased significantly over the years, and we need a safe way for pedestrians and kids on bikes to access all the wonderful restaurants and shops in town.”

Some residents suggested repairing the wooden bridge where Edgeboro Road meets North State Street. In fact, I was invited to look into this with members [Nicole Rodowicz, Marv Cohen] of the Borough Council. It is entirely on private properties, both of which are in Newtown Township. The owners could not be contacted and that effort failed.

Several residents thought the cost would not be justified considering its limited use and suggested the money could be better used to provide pedestrian walkways in other areas of the township such as from Tyler Walk to the shopping center. “In that remote, corner location, nobody's going to be using this thing,” said a Newtown Crossing resident. “Waste of $$$$$”

In his presentation, Mr. Sellers noted that PennDOT has a warehouse full of old disassembled bridges that can be purchased for as little as $1. However, there are real costs associated with transporting and reassembly of the bridge. Etc.

Some residents with whom I have communicated have some ideas for reducing these costs. One suggested treating it like a ‘barn raising.’ “For example, someone here may know someone with access to a flatbed tractor trailer.  Try to get local businesses to fund hiring people to load and unload the bridge parts.”

At the Work Session last week it was suggested that grants could be sought to cover some of the costs and the Township could seek “in-kind” services from professionals such as engineers, etc. Of course, most grants will not cover the total costs involved and as we know there is a lot of competition for grants money.

With regard to “in-kind” services from professionals, I believe that would be very problematic as it could be viewed as a conflict of interest or even a form of “Pay-to-Play.”]

ESD Report: Chief Forsyth reported the department responded 106 calls for service during September including four building fires, three dwelling fires and 57 EMS calls. The Township had 51 fire safety inspections and there were 33 in the Borough. September training encompassed 168 hours for the ESD and 82 hours for the Fire Association.

Mr. Mack thanked Chief Forsyth for attending a meeting with the Newtown Walk HOA regarding the fire on Jenks Aly.

Mr. Mack also expressed concern over the fire pit being installed near Harvest. The Chief said it was approved through land development and Mr. Lewis concurred adding the engineer inspects it as well the building inspector. Chief Forsyth said it will be part of the annual safety inspection.

The new fire pit near Harvest Seasonal Grill. I’ve been told this is not part of the restaurant but an amenity of the shopping center and therefore any one is welcome to sit there and not be required to be a customer of the restaurant. But how do you turn on the fire?🤔

Planning Commission: Chairman Allen Fidler reported at the October 15, 2019 meeting the members reviewed three items of business. The first was a Zoning Board application for Melissa Hunt at 449 Merion Drive. The applicant is seeking a variance and special exception to install a 10’ x 16’ shed on stones in the rear of a non‐conforming lot. The Commission recommended the Supervisors not oppose this application.

The second was a conditional use C‐6 for Excell Fitness LLC (F45 Training) at 2833 South Eagle Road in Village of Newtown Shopping Center. The Commission recommended the Supervisors not oppose this application.

Last was the proposed Kownurko/Rambo Subdivision at 217 and 223 Eagle road in the CM Zoning district. The applicants propose to subdivide the combined properties into six single family lots including the two existing residences. All the lots will be served by a proposed private, shared access driveway. The Commission agreed not to make a recommendation until the attorneys clarify the details and put the specifics in writing for review at the next meeting on November 19.

Tour of Police Station: Mr. Mack reported he toured the police station with Chief Hearn. He also reminded all National Drug Take Back day is this Saturday, October 25 and residents can safely dispose of prescription drugs in the receptacle provided in the Township building between 10AM and 2PM. 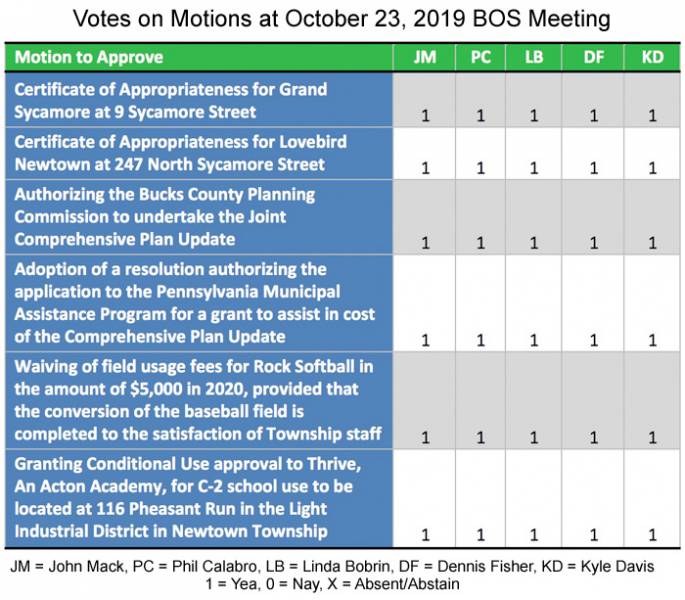