The following is a brief summary of the November 13, 2019, Newtown Township Board of Supervisors (BOS Definition) meeting based upon the official minutes of that meeting, which you can find here. In attendance and voting were Supervisors: Chairman Phillip Calabro, Vice Chairman Linda Bobrin, Secretary John Mack, member Kyle Davis and member Dennis Fisher. Also in attendance were: Township Manager Micah Lewis and Township Solicitor David Sander.

Savvy Citizen: Mr. Mack inquired about adding Savvy Citizen to the budget as he believes it is a useful tool that would not require much maintenance. Mr. Sander confirmed Board consensus is required at this time to add or subtract from the budget.

Mr. Lewis said there is no staff to maintain it. Mr. Mack believes there is not much maintenance required. A discussion ensued on the Savvy Citizen app including the cost, upkeep, staffing and benefits to the community.

Mr. Mack moved for the Board to consider revising the budget to purchase the Savvy Citizen App. Mr. Fisher seconded. The motion failed 2‐3 with Mr. Calabro, Ms. Bobrin and Mr. Davis voting nay.

[Mack's Notes prepared prior to meeting: I request that the 2020 budget include $3,600 to implement the Savvy Citizen mobile-based notification system that was reviewed by the BOS at the September 16, 2019, Work Session. That would cover the monthly payments of $249 for 12 months plus the one-time marketing and setup fee of $600.

Keep in mind, Newtown has the option to “Test Drive” Savvy for an unlimited number of months via the monthly payment option. Then, at any time, Newtown could take advantage of a two-month discount by paying for a year. That would bring the total cost down to $3,090. In addition, if we decide to do this by 10/31, Savvy Citizen will give Newtown the calendar plug-in at no charge for the first year. This is a savings of $600.

About 87% of respondents to my online survey (N=151) said they would opt-in to a notification service such as Savvy Citizen. Keep in mind that any resident of neighboring townships – including Wrightstown, Upper Makefield, Middletown, Richboro, North Hampton, Lower Makefield, etc. – will be able to see notifications from Newtown via the free iPhone app. This could benefit Newtown’s Parks and Recreation Department, whose activities are often used by non-residents. The Parks & Rec Committee reviewed the Savvy Citizen app and it thought it would be very useful.

413 Durham Road ZHB Appeal: Nate Fox presented the application on behalf of Durham Road Partners Group, LLC. He stated they filed a use variance to be heard by ZHB on 12/5/19 and the Planning Commission next week for 27 townhouses on a cul‐de‐sac on the property at 413 Durham Road which will also require dimensional variances as the property is zoned for professional office.

[Mack's Notes prepared prior to meeting:

[For details, read "Newtown Supervisors Oppose Plan To Build 27 Townhouses" and "It's Strike Two for 27 Townhomes on Durham Road!"]

2020 Budget: Mr. Lewis updated the Board on changes to the Budget since it was presented [read "Newtown Township Begins 2020 Budget Review Process"]. He updated the YTD information, adjusted some year‐end projection numbers as well as the 2020 budget estimates in the general fund. The adjustments resulted in an increase of the projected 2019 year‐end fund balance of over $100K for a total fund balance forward estimate for 2020 of $2,372,000. The total expenditures for the 2020 budget are $13,081,611 with estimated fund balance forward of $1,321,804 equating to 10.1% of total expenditures. Regarding revenue, due to the non‐resident EIT not coming in as predicted, the estimate was downgraded to $2,000,000 from $2,078,500 and the 2020 budget estimate was decreased to $2,050,000 from $2,125,000. The delinquent EIT collection in October was better than expected so the year end estimate increased to $285K from $225K that was presented. Remaining revenues remained unchanged and there is no tax increase proposed to support the general fund.

Newtown Ambulance Squad: Chief Evan Resnikoff of the Newtown Ambulance Squad (NAS) presented citations to several members of the NAS, St. Mary’s EMS and Newtown Fire Association. He said that Bucks County automatically dispatches two paramedic ambulances whenever a cardiac arrest is reported and in the third quarter of this year 39% of all cardiac arrests were resuscitated by the time they arrived at the hospital. Chief Resnikoff said these positive outcomes would not be possible without County, Municipal, and residential support and he emphasized the importance of knowing CPR.

Regarding residential support, Mr. Resnikoff reported the annual subscription drive will be mailed out in approximately two weeks. He explained the program helps the organization financially and saves co‐pays and deductibles for subscribers. In response to Mr. Mack’s questions, Chief Resnikoff confirmed all family members, even those visiting your home from out of town, would be covered by the household subscription. He also said the annual report would be published on the website, but he would be happy to review for the Board in January.

[Mack's Notes prepared prior to meeting: In a January, 2018, report, Mr. Resnikoff said that the squad’s response to opioid-related calls was up 58% in the first 8 months of 2017 compared to the same period in 2016. This adds a significant cost to the healthcare system including EMS because greater than 80% of these patients have no insurance and cannot pay the fees.

The BOS hasn’t had an update on this and other activities of the NAS since January, 2018. I requested that Mr. Resnikoff give the Board and the public an update such as an annual report for 2018 so that we can evaluate if any further assistance from the Township is warranted, especially with regard to the opioid epidemic. I would note that the Twp is currently pursuing a case AGAINST MAJOR OPIOID MANUFACTURERS. As I have stated in the past (read "Newtown Township Joins Suit Against Opioid Manufacturers and Distributors"), it is my hope that If the Township were to get some money out of this, small as it might be, that the funds are used to support opioid anti-addiction programs and implement educational programs for the general public and help emergency services defer the costs involved in responding to drug overdoses.]

Police Report: Chief Hearn reported the department responded to 1,803 calls for service during October including 14 arrests, 83 traffic collisions and 215 traffic citations and the department continues to focus on aggressive driving [see details here]. The Chief said one arrest was for theft from vehicles, and he reminded all to keep vehicles locked as there have been several sprees of theft from unlocked vehicles.

Mr. Mack asked about ACT 79 noncompliance. The Chief explained the new law implemented in April where anyone who gets a protection of abuse order and owns a firearm will be required to relinquish their firearm.

Roberts Ridge Park: Mr. Mack reported there was a tree planting in Roberts Ridge Park on Saturday, and he thanked the residents and specifically Elen Snyder for taking this project on with the help from the Neshaminy Creek Watershed Association. Mr. Mack also thanked Mr. Lewis and the Park and Rec department for overseeing the project, which was totally funded by residents.

Environmental Action Council (EAC): Mr. Fisher reported the EAC had a joint meeting with the Borough EAC to share ideas and there was a discussion about how to promote reducing single use plastics. 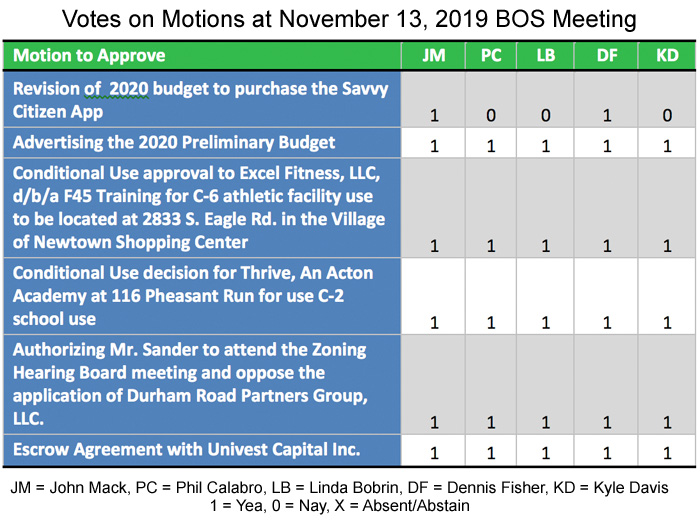