The following is a brief summary of the November 26, 2019, Newtown Township Board of Supervisors (BOS Definition) meeting based upon the official minutes of that meeting, which you can find here. In attendance and voting were Supervisors: Chairman Phillip Calabro, Vice Chairman Linda Bobrin, Secretary John Mack, and member Dennis Fisher. Also in attendance were: Township Manager Micah Lewis and Township Solicitor David Sander. Member Kyle Davis was absent.

Durham Partners Group LLC, 413 Durham Road: The applicant is seeking zoning relief in connection with the proposed development of a five-acre lot with one existing single-family home into a 27 -lot town home community. The application was previously presented to the BOS who opposed the project. The Commission has concerns with the density issues and wetness of the area. There was discussion of other options for the area including a 24,000 square foot medical office building. The Commission opposed this application.

Mr. Mack stated he attended the PC meeting and heard some comments from PC that reflected the BOS feelings about the Durham Road application. He suggested, since all oppose this application, to motion withdrawing the ZHB application. Mr. Calabro said it was a good suggestion, however it is up to the applicant to withdraw. Mr. Calabro added he is still in favor of sending the solicitor to the meeting to oppose the application.

It's Strike Two for 27 Townhomes on Durham Road!

Five-Year Financial Plan: Jack Brod reported on behalf of the Finance Committee that Newtown Township was awarded a matching grant from the Pennsylvania Department of Community and Economic Development to hire a consultant to perform financial analysis and develop a five-year plan to help improve the Township's fiscal position. An RFP was developed, advertised and sent directly to a list of recommended consultants. The response was less than anticipated due to timing factors and other RFP's in progress, however one proposal was received from Econsult Solutions, a firm in Philadelphia with experience in developing five-year plans for municipalities. Mr. Brod shared additional information about the company and said their proposal was in line with the requirements and within the allocated budget. He said the recommendation of the Finance Committee is to select a date between now and year end to interview consultants from Econsult Solutions.

Mr. Calabro asked Mr. Brod for his input on the budget. Mr. Brod offered his observation that the current budget reflects why the Finance Committee and the BOS are moving forward to look for a long-term plan, as the budget continues to be challenging. He said revenue continues to be less than expenses resulting in the need to tap into the dwindling general fund.

Ratification of Opt-Out of Opioid Litigation Class Settlement: Mr. Sander explained the ratification of the Township opting out of a class action litigation settlement based on the opioid epidemic. The Federal Class was certified out of the northern district of Ohio and every municipality in the country was sent a notice to become a member of the class. The recommendation from the Township's outside counsel is to opt out of the federal class so the Township may pursue their own suit.

Mr. Mack asked if this means we gave up on pursing companies in court ourselves and Mr. Sander said quite the contrary, this decision enables the Township to pursue the companies on our own. Mr. Mack cited a Wall Street Journal article and generated some discussion on this topic and Mr. Sander confirmed that this was not related to the Township's case.

[From Mack's Notes prepared prior to meeting:  WSJ Reports That Federal Prosecutors Open Criminal Probe of Opioid Makers and Distributors, many of whom are part of this lawsuit. What impact does this have on our case if we ratify this opt-out of the federal class action case? “Companies including Teva, McKesson, Mallinckrodt, AmerisourceBergen, Johnson & Johnson and Amneal Pharmaceuticals have received subpoenas, the Journal reported. More subpoenas for the probe, which is still in its early stages, are expected to come. If the investigation turns into criminal charges, it could be the largest prosecution of drug companies said to have been part of the opioid crisis, the Wall Street Journal reported.”]

Newtown Pedestrian Bridge and Resolution: Mike Sellers, member of the Newtown Creek Coalition (NCC) gave a slide presentation proposing the concept of building a footbridge over Newtown Creek at the location of the historic trolley bridge between Frost Lane and Durham Road. This would require a partnership between the NCC, Newtown Township and Newtown Borough.

In response to Mr. Mack's questions, Mr. Sellers said the NCC envisions the bridge for the use of all, including bicycles and strollers, and will be ADA compliant. Further Reading: "Newtown Creek Bridge Proposal ‐ Discussion at the October 23, 2019, BOS meeting" and "Newtown Creek Bridge Proposal Questionnaire Summary," a copy of which was submitted to all supervisors.

[From Mack's Notes prepared prior to meeting:  At the Work Session last week it was suggested that grants could be sought to cover some of the costs and the Township could seek “in-kind” services from professionals such as engineers, etc. Of course, most grants will not cover the total costs involved and as we know there is a lot of competition for grants money. With regard to “in-kind” services from professionals, I believe that would be very problematic as it could be viewed as a conflict of interest or even a form of “Pay-to-Play.” Costs associated with authorization for “staff and professionals of Newtown Township to participate in the exploration of the requirements for such a project, including available funding sources” are not specified. In addition, the structure of this “participation” is not specified. I assume this will be an “exploratory committee?” I would like the resolution to specify the composition of such a committee to include representatives from the Township BOS, Borough Council, Newtown Creek Coalition, plus staff and professionals from both the Township and the Borough.]

Mr. Mack asked for feedback from the meeting with Representative Fitzpatrick regarding the dire need for volunteer firefighters. Chief Forsyth reported that several chiefs attended a meeting with Representative Fitzpatrick and other state reps to try to come up with a plan to recruit volunteers. The Chief said we are in crisis mode for volunteers and he emphasized the seriousness of the situation.

Newtown Fire Association: [From Mack's Notes prepared prior to meeting:2020 FUND DRIVE: was launched on November 5, 2019. Residents should have received the letter. I urge you to make a donation, which will help pay for necessary equipment and training, which reduces insurance premiums. I can tell you that the NFA is doing all it can to raise money from various sources, including applying for multiple grants. The NFA is a 501 (c) 3 non-profit organization, so your donation of $35, $45, $55, or other amount is 100% tax-deductible.] 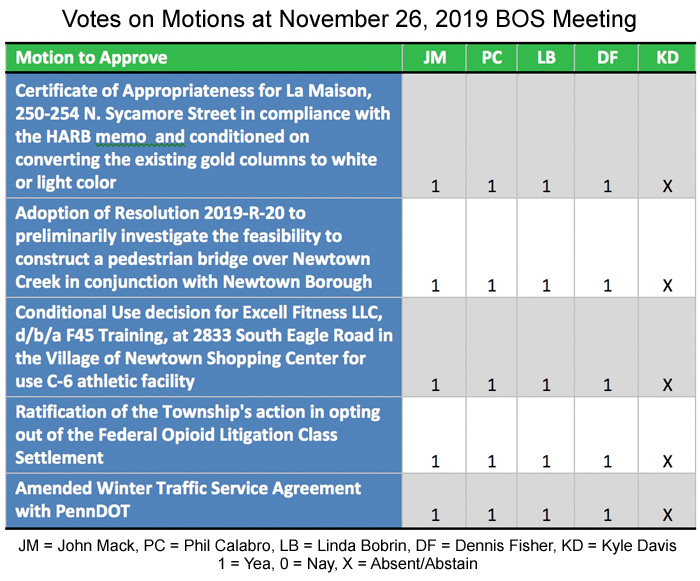