The following is a brief summary of the December 11, 2019, Newtown Township Board of Supervisors (BOS Definition) meeting based upon the official minutes of that meeting, which you can find here. In attendance and voting were Supervisors: Chairman Phillip Calabro, Vice Chairman Linda Bobrin, Secretary John Mack, and member Dennis Fisher. Also in attendance were: Township Manager Micah Lewis and Township Solicitor David Sander. Member Kyle Davis was absent.

Conditional Use Hearing - Toll Pa. XVIII: Mr. Sander explained when the conditional use application was received it was advertised for public hearing this evening. Subsequently a letter was received from the applicant's attorney to extend the time which the BOS must hear matter until 1/31/20.

Ms. Bobrin moved to continue the Hearing for Toll Pa, XVIII until January 22, 2020 at 7:00 PM in the Township meeting room.

Mr. Calabro asked what will happen on January 22. Mr. Sander said we will have a conditional use hearing. He said there will be no further advertisements in newspapers or other notices mailed which is why we are opening the hearing formally and continuing...Mr. Lewis will investigate what notices were or were not sent out and ensures the residents will be notified either by Toll or the Township.

Discussion of motion: Mr. Mack had previously requested to get a line item in the budget for the Savvy Citizen app and he reported they have come back with a lower cost and are offering to have sponsors cover some of the cost. He said the new estimate is $2,841 for the year including set up and marketing fee down from the original $3,600. Mr. Mack explained the benefits of Savvy Citizen and asked the Board to consider adding this as a line item to the Budget. Mr. Calabro said we already have moved to approve budget as outlined. A discussion ensued on budget amendments and the time frame. Mr. Mack said he will distribute materials and review with local businesses to determine interest in sponsorships. He will also speak with Mr. Lewis about personnel requirements prior to moving forward.

Consideration of Declaration of Municipal Curative Amendment: Mr. Sander explained according to Pennsylvania law the use of property as a convenience store and gas station as a combined use is to be provided for by law and the use contained in a zoning ordinance. He said the Joint Municipal Zoning Ordinance doesn't have such a use and are in the process of drafting an ordinance; in the meantime there is a procedure that allows municipalities to examine their zoning ordinances and if an invalidity is found, they have an opportunity to declare that invalidity and announce they will cure the invalidity.

Mr. Calabro asked Mr. Sander to explain how this protects the Township against the gas station/convenience store property use. Mr. Sander said from the date of declaration for period of nine months, nobody can file an application for land development that deals with gas station/convenience store use, nor can they file a challenge. When questioned by Supervisor Mack, Mr. Sander stated that this action does not apply to the substantive legal challenge to the joint municipal zoning ordinance previously filed by Provco.

On January 8, 2020, the BOS voted 3-0 (Mack was absent) to pass Resolution No. 2020-R-5 with the following Specific Findings Setting Forth the Declared Invalidity of the JMZO Ordinance:

Police Report: Chief Hearn reported the department responded to 1,771 calls for service during November including 6 arrests, 89 traffic accidents, 41 of which were deer related and 220 citations. The Chief thanked the International Union of Painters and Allied Trades who donated painting of police building and garage at no cost to township. He reminded all to have neighbors help retrieve packages when delivered and not to leave them on front steps or driveways. Mr. Mack asked about catalytic converter theft. The Chief said we have not yet had incident of this in Newtown. Read details of the report here.

Bobrin Announces Plan to Leave Board: Ms. Bobrin shared that this will be her last public meeting as she is leaving the Board of Supervisors to become the Register of Wills for Bucks County.

Not all motions are included. 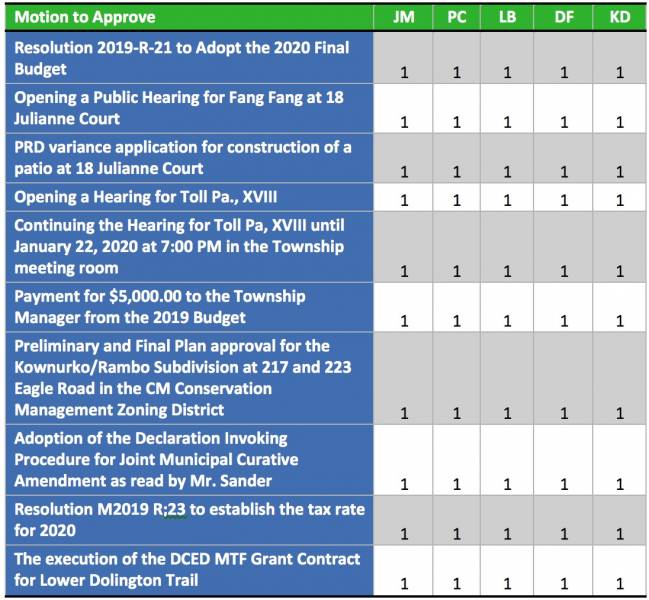