A revised "Love is Love" resolution was passed by unanimous bipartisan 5-0 vote at the March 11, 2020, Newtown Board of Supervisors (BOS) meeting. See the resolution at the end of this post.

My first attempt to pass such a similar resolution at the February 26, 2020, Board of Supervisors meeting failed by a 3-2 vote (see here). That resolution, which was modeled after one pushed by state Sen. Steve Santarsiero [which failed to reach the floor in Harrisburg], would have established February 15 as “love is love day” in the township. Chairman Phil Calabro joined Board colleagues Kyle Davis and David Oxley in voting no. All three said they felt the document was "exclusionary."

Both resolutions were inspired by the first ever “Love is Love Prom” for LGBTQ+ youth and their allies on February 15, 2020, hosted by the Rainbow Room LGBTQ Youth Organization at the Michener Art Museum.

After discussions with Marlene Pray, the Rainbow Room’s Director & Founder, Sen. Santarsiero, Yardley Borough Council Chair David Bria, Newtown supervisor Dennis Fisher, and others, I created the revised “Love is Love” draft resolution that I hoped would be more palatable to the Board of Supervisors yet still achieve the utlimate gooal of the LGBTQ+ community; i.e., to know that Newtown Township recognizes the amazing prom and supports and values LGBTQ + minority youth in our community. It worked!

But before my resolution was presented to the Boarrd for a vote, we heard from several LGBTQ+ youth from The Rainbow Room who spoke in favor of passing a #LoveIsLove resolution. There is no doubt that the impassioned comments from these young people, their parents, Marlene Pray, and others made a big impression upon the supervisors.

Although it took several tries and a modified version to get a resolution passed, I believe it was a great opportunity to educate the public regarding the trials and tribulations of LGBTQ + minority youth. I included the "+ minority youth" in the resolution because (1) according the Peace Center, LGBTQ + minority youth in our community face harassment, violence and discrimination, and (2) Supervisor Oxley, who is African-American, noted that his son was called the "n" word by a classmate in school and expressed how difficult it was for him as a father to deal with that.

PA State Senator Steve Santarsiero, whose own Love is Love Resolution failed to reach the Senate floor for a vote (see here), urged Newtown Township Supervisors to pass the Love is Love resolution.

Comments From the Public

A mother of a 13 yo transgender son, who said how proud she was of her son, urged Newtown Township Supervisors to pass the Love is Love resolution.

There were many more comments from local LGBTQ+ youth and their high school friends. You can view the entire streaming video of the Board of Supervisors meeting - including all the comments made to the Board - on the official Newtown Township website here.

Reading of the Resolution and the Vote

All in all, there was much love expressed at the meeting! 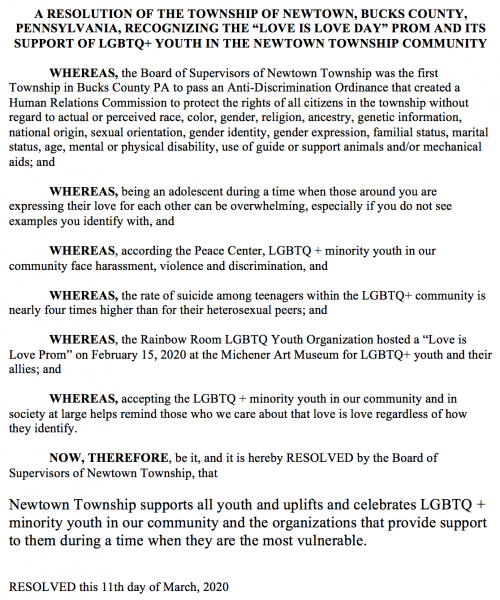