The following is a brief summary of the June 10, 2020, Newtown Township Board of Supervisors (BOS Definition) Zoom meeting based upon the official minutes of that meeting, which you can find here. You also can view the video archive here.

Chief Hearn reported there were 1,449 calls for service during May including eight arrests, three DUI’s and 38 traffic accidents; 65 traffic citations and 27 warnings were issued. The Chief said there was a $39K fraud investigation and he encouraged the public not to give out personal information or buy gift cards from anyone they do not know. Additionally, on May 14 there was a vehicle investigation involving a firearm and pursuit where subsequently a male was arrested by warrant and there was one overdose death.

The May 15-21, 2020, weekly call report from the Newtown Police Dept shows that officers responded to 376 calls for service that week, which is back to the normal, pre-COVID-19 range. 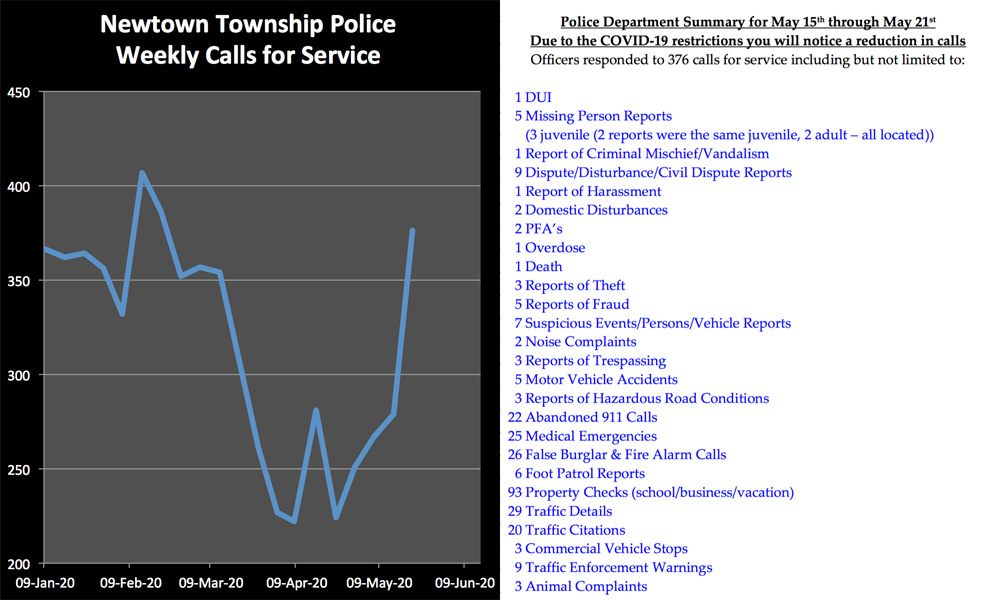 The Chief made the following statement regarding the killing of Mr. Floyd by a Minneapolis policeman:

Mr. Mack suggested holding a town hall where the goal would be having open conversations among representatives of the community and the NTPD [read "Newtown Supervisors Plan a Town Hall Meeting with Police"]. The Chief replied stating he has held town halls previously in Philadelphia and would be willing to do it in Newtown, however he added people must participate in order for it to work. There was a brief discussion and it was agreed that Mr. Mack and Mr. Oxley will coordinate this effort.

Resident Jennifer Voustinas said she attended a peaceful protest where several pickup trucks were trying to intimate protesters in a reckless and unsafe manner. Ms. Voustinas asked if these people were identified and if any action was taken. The Chief responded that the individuals were stopped and investigated.

Resident Doug Campbell of 51 Richboro Road has a concern over non-permitted outdoor eating space, presumably referring to the restaurant at 50 Richboro Road. Mr. Calabro said this matter has been taken care of for the time being.

Comment from resident Anju Madnani who addressed the Newtown Police Department regarding an incident that occurred In Newtown in front of Starbucks involving her 18 and 22-year-old children who were putting up posters regarding George Floyd’s death [ for background read "Let's Make Sure Racism Has No Place in Newtown!"]. She said they were followed by a white couple who verbally and physically assaulted them, and all was captured on video. She states the DA charged the husband with social mischief where he must pay $300 for phone damage. She asks what you would do if these were your kids and said what we need is a safer environment and community where no kid of any race will feel scared to walk and hesitate to express their rights. Nobody in this world should even dare to touch or hit any kid for their innocent behavior. She said we have to set an example in this great community by appropriately punishing this couple so nobody else in the future will dare to do that. She also said the woman, who is a nurse, was not wearing a mask. She said in the end she believes in the Newtown legal system and expects to have better outcome of this incident which has shaken thousands of people.

Comment from resident John D’Aprile who said the projections in back of John Mack are very distracting.

Reports of Committees, Boards and Commission

Planning Commission (PC): JMZO Amendment for the E-30 Ordinance - Convenience Store/Fueling Station: Mr. Fidler, Chairman of the PC reported the commission met via Zoom on Tuesday, June 2, 2020 and they spent the evening reviewing the E30 use. Mr. Fidler said the main change was the removal of the use in the OLI and LI Districts, leaving the use permissible only in the OR District in Newtown. Some other notable changes were the lot size will be a minimum of four acres, there will be six fueling dispensers allowed which equates to service for a total of 12 vehicles, and in the OR district only, if minimum lot requirements are met, there can be a maximum of 8 fueling dispensers.

In response to Mr. Mack’s questions, Mr. Fidler stated the reason the PC entertained changing some previous recommendations was due to the Curative Amendment challenge. He added the consensus of the professional staff was that we must placate [the Wawa complainants] to some degree in the Amendment

Finance Committee (FC): Helping Businesses Reopen: George Sladany. FC Chair, reported the Finance committee met on June 9 and most of the time was spent discussing how the Township could help businesses reopen safely. The first concern was that assistance must be long term, approximately over a 9-12-month period. He said businesses are concerned that they are being hit with changing requirements and there is no single authority for guidance on how to reopen; therefore, businesses are independently deciding what they are going to do. Mr. Skladany said there were representatives from the NBA [Newtown Business Association] in attendance and the consensus was to get the public out they will have to ensure public is comfortable to come out. He said the Borough has passed a resolution to specify what businesses can do and said the Township can assist in offering temporary changes to allow tables outdoors, increase capacity and change signage requirements, etc. Mr. Skladany said the key takeaway was businesses felt there has to be some type of public widespread promotion to advise they are functioning and healthy and a marketing campaign to buy local was discussed. He then reviewed other ideas that were brought up such as digital communications, community flyers, temporary signage, using HOA’s to distribute info, etc. [see summary below.]

Solicitor: Discussion of Sunshine Law: Mr. Sander said the Sunshine Act is in full force and effect and the reason we can have remote meetings is due to Act 15 of 2020 where the state legislature approved virtual/remote meetings provided the public was notified and are able to submit public comment; there is no waiver of public comment or that requirement. He said we provide for public comment both before and during our meetings and we have met the legislature’s requirements for holding legal meetings. Mr. Sander said no meetings can be held by invitation only and all meetings must be publicized ahead of time. If there is limit of attendees due to spacing it will be on a first come first serve basis.

Mr. Calabro asked if a supervisor received an email and had permission to read it, would this be permissible. Mr. Sander would like the public comment to mirror what happens in public meeting, however if someone has submitted an email and asked a supervisor to read it as public comment, he would say yes as long as the name and address was submitted.

Economic Development Committee (EDC): Mr. Calabro said there are candidates who have expressed an interest in the EDC and the BOS can take action now or discuss at the work session but won’t be able to vote. Mr. Fisher said he read through the submissions, had his questions answered and is prepared to vote in the affirmative. Mr. Mack agreed that all applicants are qualified and meet requirements. The following were appointed to the EDC:

Not all motions may be included. 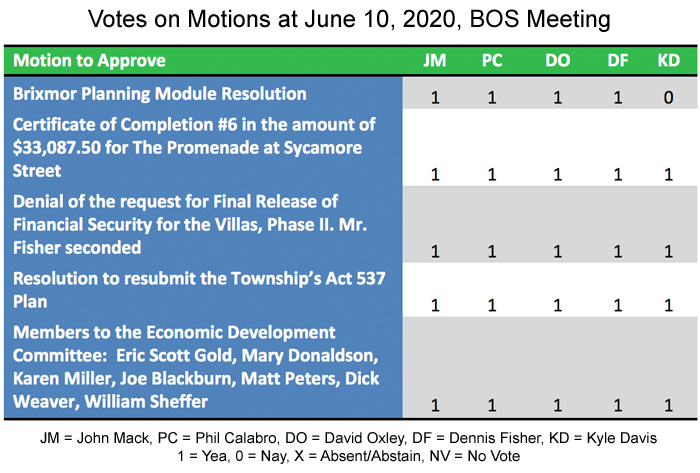 The following are my personal notes that I used to prepare for this meeting. I may not have asked all the questions in the notes at the meeting. You can also download the PDF version here.