On September 23, 2020, the Progressive Local Officials of Bucks County, which is supported by the Bucks County Democratic Committee, hosted a Zoom webinar entitled "Policing in Our Community." The moderator was Doylestown Township Supervisor Jen Herring. Panelists included: 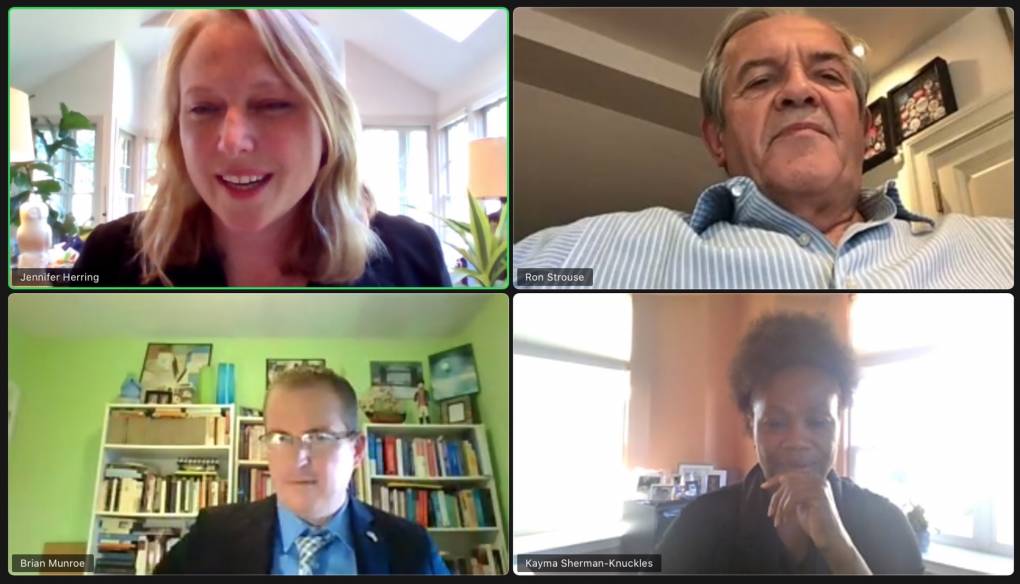 The panel addressed the following questions among other issues:

I present highlights of the discussion below. You can read my personal (UNOFFICIAL) transcript and/or listen to the entire discussion here.

Brian Munroe mentioned that he created a liberal law enforcement group made up of progressives that have police and law enforcement experience. Right now, it's called the National Democratic Law Enforcement Association. This was in response to the fact that 61 of the 64 Fraternal Order of Police (FOP) organizations in PA voted to endorse Trump and only 3 – 5% - voted to endorse Biden. Also, the National Association of Police Officers, a lobbying group that says it represents more than 241,000 officers nationwide, endorsed President Trump for a second term. This comes after the association had supported Mr. Trump's challenger, Joe Biden, in the 2008 and 2012 elections [source]

"We feel like the FOB is missing a phenomenal opportunity to grow closer to the community," said Munroe. "Instead, they're kind of circling the wagons and getting defensive, and we understand that. But we think that we can fill a void. And there is a potential for a national article to be written up on this. The Washington Post is very interested in writing the story, so we'll see where that goes."

“What are some policies that would be helpful for us to look into in our own police departments to help make sure that we have the best policies as far as the racial disparities?", asked Sherman-Knuckles. The following were policies mentioned during the webinar:

Refreshment training is also important - especially de-escalation training. Just as important as providing for that is how often it's provided and how quickly it is provided when you have a new hire.

Directives & The Use of Force Continuum

“I would be guessing, but [in our department] there might be as many as 40 or 50 [directives], which outline conduct on the part of our members in the police department,” said Strouse. “So we will have a directive on the use of force, will have a directive on our canine corps. We'll have a directive on our body cameras in terms of how they're operating and how the information is secured and so forth and so on. Those directives are reviewed by the police commission. If you don't have a police commission, they should be reviewed by elected officials to make sure that they meet the demands of the community and the current environment that we find ourselves in in so many of our communities. We're reviewing them right now. And we'll review them on an ongoing basis. From a publicly elected person's point of view to make sure they're appropriate and appropriate to the times and appropriate to modern policing.”

Directives are not necessarily written policies, but are notices put out by the chief or by a lieutenant.

“So to a certain extent, what I understand is that our directive with regard to the use of force has a continuum of intervention on the part of the individual police member of the police department,” said Strouse. “Yes, they have to make a judgment as to where to enter that continuum. But if their training is proper, they enter that continuum at the lowest level. The lowest level actually could be a conversation. And lethal use of force is at the very end of that continuum. So that is where, from my perspective, the training is absolutely essential so that they know that under all possible circumstances, they pick the lowest level of continuum to engage this person who may be committing a crime or whatever."

Does Training Work Equally Well for People of Color As It Does for White People?

“I've seen, at least on social media, people saying things like the training worked for all the white people, but it didn't seem to work for anybody of color,” said Herring. “So they knew not to shoot somebody that was white, but people of color don't get that same sort of benefit from training. Do you feel that's fair?”

“So I think most of the time the reason why they are quick to trigger is because of the bias,” said Sherman-Knuckles. “It could be, you know, unconscious biases. That to me is not true, but it is the fact that your race makes a difference. So if that's the case, let's now look at some statistics of the police department and how they used force and how to deal with black and brown people. So if it's not true, then we can look at the data and the data cannot lie.”

“Because if you talk to police chiefs, the first thing they will tell you that, oh, no, we don't target black and brown people,” said Sherman-Knuckles. "We don't treat them differently. But then when you get the data in, they can see it and see that, oh, you know, maybe it is true now looking at the data, let's do something about it.”

“So, yes, I do believe that white people are treated differently in terms of ‘quick to shoot’ than black and brown bodies.”

“So often this kind of training is a partnership,” said Strouse. The Pearl Buck Foundation was mentioned. “I think that's something that we should be doing and something that we would welcome. And often it has to come … from the outside. We can figure out a way to fund it…[which] might be [via] the foundation rather than [from] the taxpayer... But I guess I'm suggesting is just finding the right partner and then finding ways to make it happen.”

Unfortunately, nonprofits are struggling these days. How about funding via resident donations through GoFundMe? or this: The Central Bucks Regional Police Foundation.

“Some of this, frankly, requires funding above and beyond what we might expect from a taxpayer based police department,” said Ron Strouse. “So we've actually also created a foundation, a 501c3 [Central Bucks Regional Police Foundation (CRPF)], that funds some of those initiatives that go above and beyond what you might think a tax-based Police Department might provide. The 501c3, for example, has funded, in our case, the first two dogs of our canine corps. Once it's established, it becomes part of the regular budgeting for a police department.”

“The only reason that Radnor started keeping track of stops or pedestrian stops, traffic stops, was because there was a lawsuit,” said Monroe. “Somebody was claiming that, you know, the police department stops minorities at a higher percentage than white. And what they started out having us do is they started having us issue a citation [with] four copies .... And of course, you don't put the race and sex on the copy you [give to the] individual because in that scenario they're going to say, what on earth is that about? But what we do is for our internal copies, we would be required to write, you know, white, male, white, female, Asian, male, so on and so forth.”

“How would we, as elected officials, municipal councils, steer our police department into collecting that type of information?, asked Herring.

“Well, I'm going to weigh in and say that the level of supervision coming from elected officials of police departments is all over the lot,” said Strouse. “I hope I don't get anyone angry on this, but I think by and large, it's a relatively low level supervision. And definitely, given our experiences over the last few years, let alone the last few months is inadequate to the task.”

“I think I think there needs to be some dramatic change there. It should begin with the elected officials,” said Strouse. “I mean we're all elected to provide primarily, first and foremost, public safety. So this is this is where it begins. And probably without exception, it is the largest budget item of any municipal budget in terms of expenditures in public safety is our police department. So there's a there's a lot of argument that the public should be more engaged in this process.”

Herring asked: Any recommendations as far as how we can break through that stone wall that comes up when you try and stick your nose in the police business as an elected official?