Top
Summary of November 25, 2020, Newtown Board of Supervisors Meeting

Summary of November 25, 2020, Newtown Board of Supervisors Meeting

The following is a brief summary of the November 25, 2020, Newtown Township Board of Supervisors (BOS Definition) public meeting based upon the official minutes of that meeting, which you can find here. You also can view the video archive here.

The Members have been reviewing a proposed amendment to the JMZO which defines “families” in an attempt to give the municipalities a way to regulate use of residential properties for short term rentals, such as Air BnB. The members were uncomfortable with the ordinance as presented and asked that the following footnote be added:

Our intention in this Ordinance is to express our concern for the stability and permanency of the neighborhood, and not to pass judgment on the life style choices of those who live in the household for an extended period of time. We seek only to avoid transiency, which tends to disrupt the, "sense of community and shared commitment to the common good." Albert v. Zoning Hearing Board of N. Abington Twp., 854 A.2d 401, 410 (Pa. 2004). There is no intent to discriminate, either expressed or implied, beyond the stated meaning herein.

Mr. Sander explained that the Township is required to advertise a budget for twenty days before it can be adopted. Once advertised, the budget can still be revised up to 10% overall in revenues or expenses or 25% in any category. If the Board makes any larger changes the budget must be re-advertised for an additional twenty day. The budget must be approved by December 31, 2020.

Discussion of motion: Mr. Mack asked whether the budget would need to be re-advertised if the changes were to reduce, rather than increase, revenues or expenses. Mr. Sander confirmed that only increases of more than 10% overall or 25% in a category would require re-advertisement.

Mr. Mack noted that the budget being advertised has been changed to now include a tax increase of 133%, not the originally proposed 178%. Mr. Calabro reviewed a chart provided to residents with sample tax bills based on homes with a variety of assessed values. He said that he did not believe the County plans a reassessment, so the assessed value should remain the same. 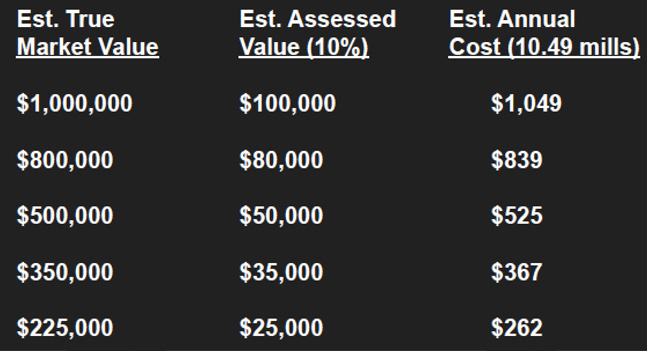 Environmental Advisory Council Meeting: 16 Nov 2020: Mr. Mack reported that the EAC would like to distribute pamphlets on native plants to residents and homeowners associations and asked about reimbursement.

Mr. Seimens: Mr. Seimens asked why an increase is needed with a projected year-end balance of over a million dollars. He also questioned why the Township had paid a consultant so much to just recommend a tax increase.

Mr. Calabro said that the Township had budgeted a portion of the money for the consultant last year and had received a grant for the remainder.

In response to Mr. Siemens’ questions about new spending, Mr. Lewis said that the budget includes new staff, including police and fire, roadway improvements and capital purchases of equipment, including public works vehicles.

Ash Kamath: Mr. Kamath suggested that, as the Township provides services to the School District, including police and fire protection, perhaps there is a way to ask for support from the District. It is not a good time to seek additional tax money from residents struggling in the pandemic. He questioned reliance of the consultant’s work which was done before the pandemic. He urged the Township to postpone the increase and suggested paying off the outstanding bonds and refinancing.

Summary of Votes on Motions

The following are my personal notes that I used to prepare for this meeting. You can also download the PDF version here.