At the January 13, 2021, Newtown Board of Supervisors Meeting, Mike Gallagher, former Supervisor, current Bucks County Deputy Chief Information Officer, and resident of Newtown Crossing, said that the Eagle Ridge HOA had a better chance of winning its appeal against Arcadia III than does Newtown. Consequently, said Mr. Gallagher, it would make sense for Newtown to help with their case, which is distinct from the "Mandamus" case filed against Newtown by the developer.

Recall that Newtown recently failed to approve a settlement agreement with the developer to settle its "mandamus" case along with other court challenges made by the developer. The judge in that case “deemed approved” Arcadia's proposed 76-home community even though supervisors were unanimous in denying the project (see story below). The Eagle Ridge Community Association filed a separate Notice of Appeal from the asserted deemed approval.

According to Eagle Ridge resident Eric Scott Gold, some residents of Eagle Ridge and other nearby communities, including Newtown Crossing Community Association, Crowne Pointe Community, Liberty Square, are interested in setting up a fund to help finance the legal battle.

Mr. Gallagher and other residents wanted to know if Newtown Township was willing to help residents fight the case in some way, including helping pay the legal fees. The Supervisors agreed they need more information before they could decide and will arrange an executive session with residents and their lawyer in the near future to discuss the options.

Listen to the following short audio clip of the discussion. The entire video archive of the meeting is available here. 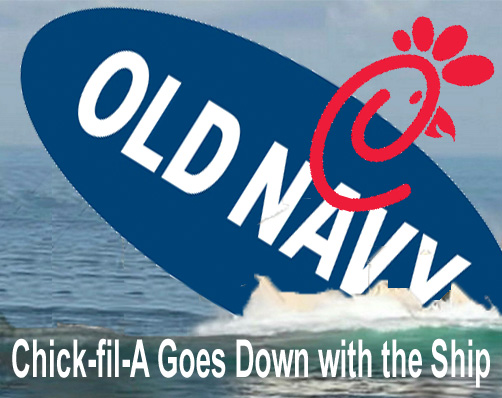 At it's January 13, 2021, public meeting, the Newtown Board of Supervisors (BOS) voted 3-2 against agreeing to a settlement with Newtown Bucks Association (NBA) regarding Chick-fil-A and a "retail pad" in the Newtown Shopping Center.

NBA intended to make certain traffic/circulation improvements as related to the existing Chick-fil-A restaurant in the Shopping Center, together with a proposed pad that would be used for additional retail space (i.e., proposed Old Navy site).

The agreement would have granted several variances, including allowing additional impervious surface for the retail space, which was the main reason the Zoning Hearing Board originally voted against the application (read "So what's the status of the proposed Old Navy at the Newtown Shopping Center?").The BOS, however, seemed mostly concerned about the plan to "improve" traffic related to Chick-fil-A.

This following audio clip from the meeting mainly focuses in on that discussion. View the video archive of the entire BOS meeting here.

The Newtown Area Jointure (the joint municipal zoning consortium comprising Newtown Township, Upper Makefield Township, and Wrightstown Township) would like your help in determining future planning needs for your community.

At the June 2019 meeting of the JZC, Lisa Wolff, Senior Planner at the Bucks County Planning Commission (BCPC), presented a proposal to update the Newtown Area Joint Comprehensive Plan, which was adopted in 2009 (listen to her presentation below). [Download the proposal here.]

The Jointure would like to hear the views of as many residents as possible, and is committed to ensuring the community plays an active role in developing the policies that will help shape the development in the Jointure for the next ten years and beyond.

It's Strike Two for 27 Townhomes on Durham Road!

At the November 13, 2019, Newtown Board of Supervisors (BOS) meeting, Durham Partners Group, LLC, submitted a Zoning Hearing Board (ZHB) application for twenty seven townhomes and associated dimensional variances on the property located at 413 Durham Road in the PS-2 (Professional Service) Zoning District. The BOS heard from the applicant's professionals that the proposed townhouse use is much lower impact from a traffic and development standpoint than a permitted medical office building.

After extensive questioning by Supervisors, the BOS voted 4-1 to send the Township Solicitor to the December 5, 2019, ZHB meeting to oppose the developer's request for 7 variances (for more details, read "Newtown Supervisors Oppose Plan To Build 27 Townhouses" in the Newtown Patch). Supervisor Kyle Davis cast the lone "nay" vote.

According to resident Mike Horbal in a private comment to me, "this is a classic example of 'overdevelopment' or, worse, 'land grab.' This use is not permitted as a use by right, a conditional use, OR a special exception in the PS-2 district," said Horbal.

In comments before the BOS, Mr. Horbal noted that without any variances, only one single family home would be allowed at this location. He said "to propose twenty seven townhomes on a 5-acre property makes very little sense except for the developer." Mr. Horbal said that if the town is really against overdevelopment this would be a "perfect example" to oppose. "Don't come to town," said Mr. Horbal, "if you can't propose a project that meets the requirements of the zoning regulations."

Resident Joyann Charlton echoed Mr. Horbal's comments and implored the BOS to take a position against the development. Ms. Charlton mentioned the strain on already overcrowded schools and busing.

View the following video of the Q&A and comments from the BOS and residents:

Heath Dumack, the engineer hired by the developer, appeared before the Newtown Planning Commission at its November 19, 2019, public meeting "as a courtesy."

Mr. Dumack responded to questions by the members of the Commission and commented that "You're being much nicer than the reception I received last Wednesday" (he was referring to the reception by the Board of Supervisors).

But the "niceties" did not last long. PC member Paul Cohen said "I don't want to be too impolite about it, but this is crazy! This is just a blatant effort to squeeze as much as possible out of this. To come in and propose - where there's supposed to be one home - twenty-seven is... incredibly bold."

Listen to the discussion at the PC:

The next step for Durham Partners Group is to appear before the Zoning Hearing Board. Will the third time be the charm or will it be strike three and "yer out!"? With the Township Solicitor there to oppose awarding variances for this plan (see below), it is my hope that the ZHB denies the application.

Would it have been possible to save the township some money and just send a letter to the ZHB? I don't think so. It is my experience that developers will never give up and they are willing to spend the money on lawyers. You can't fight that with a letter!

The prospective site for the bridge would connect Sycamore Street in Newtown Township with Frost Lane in Newtown Borough (see the map below). 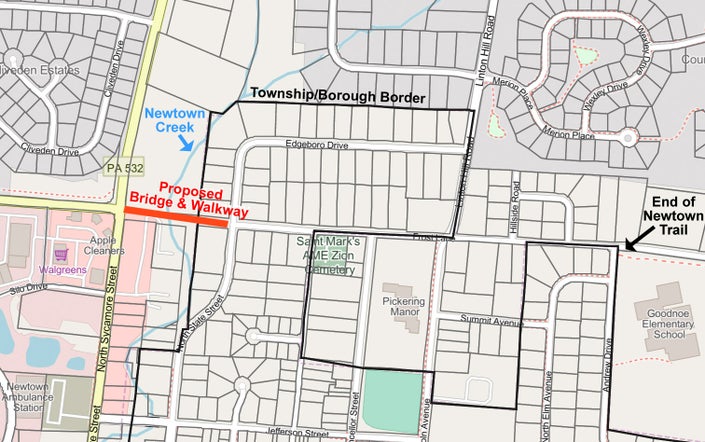 Mr. Sellers also said the proposed bridge would connect the current ends of the Newtown Trail System, and provide a vital link for the regional trail system. However, as shown in the map above, the Newtown Trail ends at Andrew Drive and Frost Lane. It is impossible for pedestrians and even bicyclists to walk or cycle safely on Frost Lane from that point to the proposed bridge entrance at Edgeboro Road.

There are other bridges over the creek that allow pedestrians to cross. So, why is another bridge needed or desired?

Mr. Sellers pointed out that these other bridges – including the nearby bridge at Jefferson Street – only have one-sided pedestrian crossings. "It's particularly difficult for bikers, walkers, or for people with strollers to get across," said Sellers.

Mr. Sellers requested that Newtown Township pass a Resolution drafted by the Coalition by which the Board of Supervisors of Newtown Township "finds the concept of a proposes pedestrian bridge over the Newtown Creek has merit Warranting further investigation." The proposed Resolution further says "that authorization is hereby given for staff and professionals of Newtown Township to participate in the exploration of the requirements for such a project, including available funding sources."

After Newtown Township passes this Resolution, Mr. Sellers said that he would present the proposal and a similar Resolution to the Newtown Borough Council for its approval. The plan is to have the two municipalities work jointly on the project.

Who Pays For This?

First, there are the fees that the Township must pay to its "professionals" (e.g. Township Engineer) to "explore the requirements" for the project. Then, there is the cost of the project itself, which would be split between the Township and the Borough. Mr. Sellers pointed out that the major portion of the real estate involved is in Newtown Township and also the most expensive part – the bridge itself. Consequently, according to Mr. Sellers, Newtown would be responsible for the majority of costs involved. But he did not give the Supervisors any estimate for those costs.

What Do You Think?

The Board of Supervisors did not make any decisions at the Working Session. Consequently, Mr. Sellers is scheduled to come before the Board at its next regular public meeting on September 25, 2019, to present his proposal again so that a formal vote can be made regarding the resolution he put forward.

Understanding that many residents may not be able to make this meeting, I invite you to respond to my online questionnaire to give me your opinion of this proposal. All responses will be confidential unless you give permission to use your name.