Supervisors Weigh in on Tax Increase

"It's never popular to raise taxes."

That’s how Newtown Township Supervisor Jen Dix prefaced her comments regarding the passage of the 2018 Budget at the January 24, 2018, Board of Supervisors (EIT Definition) meeting. 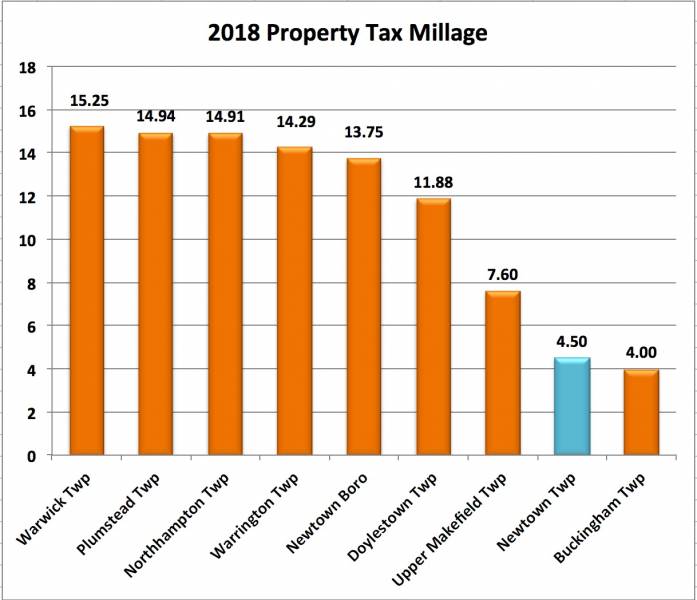 The chart above compares the 2018 property tax millage of Newtown Township to several other local municipalities each of which - like Newtown - has a 1% Earned Income Tax (EIT Definition).

“I think our goal going forward is to keep our property taxes as low as possible,” said Ms. Dix, “but also use common sense about how we are spending our money and investing in the community.”

Kyle Davis, who cast the single nay vote, commented that “we need to keep vigilant and fight extra hard to keep it were it is and not catch up with our neighbors.”

Speaking of catching up, Supervisor John Mack stated that he was “very appreciative of the fact that we are giving more money to the Newtown Ambulance Squad [NAS], which is something we really do need to do in order to catch up with our neighbors.” Evan Resnikoff, NAS Chief of Operations, said the Squad’s paramedics on average earn $3.75 per hour below market rate for Bucks County and EMTs average $4.00 per hour below market rate. Mack pointed out that NAS “must be competitive to survive. For me that’s a no-brainer.”

Putting a Bandaid on a Bullet Hole

Chairman Phil Calabro gave the audience a bit of a history lesson. “A budget does not go bad over night,” said Calabro. He pointed out that for the past eleven years the budget has been dwindling and at one point the reserve fund was almost empty. He spoke of assets that had to be sold to balance the budget even though the assets generated income every year. He spoke of occasions when the Township could not make payroll!

“For the past 10 or 12 years they [the previous Board majority members] have been putting a bandaid on a bullet hole!,” Calabro said.

Calabro noted that by having dedicated taxes for the ambulance squad and fire hydrant fund, the Township will be getting back about $300,000 into the General Fund to be used for much needed projects and maintenance, such as the purchase of a new dump truck for snow plowing, repair of the Police station roof, upgrading Veterans Park, and other improvements.

“If we don’t stop the bleeding,” said Calabro, some day will be forced to “catch up” with other local municipalities with much higher Millage rates.

You can listen to all the comments made by Supervisors by viewing the video below: