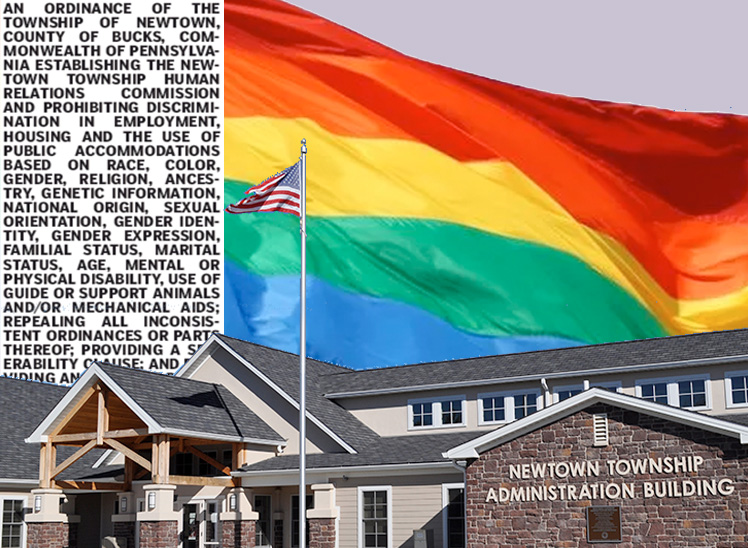 The Newtown Board of Supervisors (BOS) is scheduled to vote on an Anti-Discrimination Ordinance Definition at the November 28, 2018, public meeting. This ordinance was first proposed by Supervisor Mack at the July 11, 2018, BOS meeting (see summary minutes of that meeting here).

UPDATE (11/28/2018): The vote was 4-0 (Kyle Davis was absent) on an amended version: "The term 'housing' shall not include any personal residence offered for rent by the owner or lessee thereof or by his or her broker, salesperson, agent or employee." on page 4 under HOUSING was eliminated. See news item at the end of this post.

This ordinance is even more important now that the U.S. Department of Health and Human Services is spearheading an effort to establish a legal definition of sex under Title IX, the federal civil rights law that bans gender discrimination in education programs that receive government financial assistance, according to a memo obtained by The New York Times.

The ordinance, a copy of which you can download here, would establish a Human Relations Commission that will handle complaints filed in person at the Newtown Township Building or by mailing such complaints to the Newtown Township Building or to the Chairperson of the Commission. The first step in the process involves inviting the parties to voluntarily participate in a fact-finding conference to resolve the dispute.

If Newtown Township were to adopt this ordinance, it would nearly double the number of individuals in Bucks County living in a municipality that prohibits LGBTQ - Lesbian, Gay, Bisexual, Transgender, Queer/Questioning - discrimination.